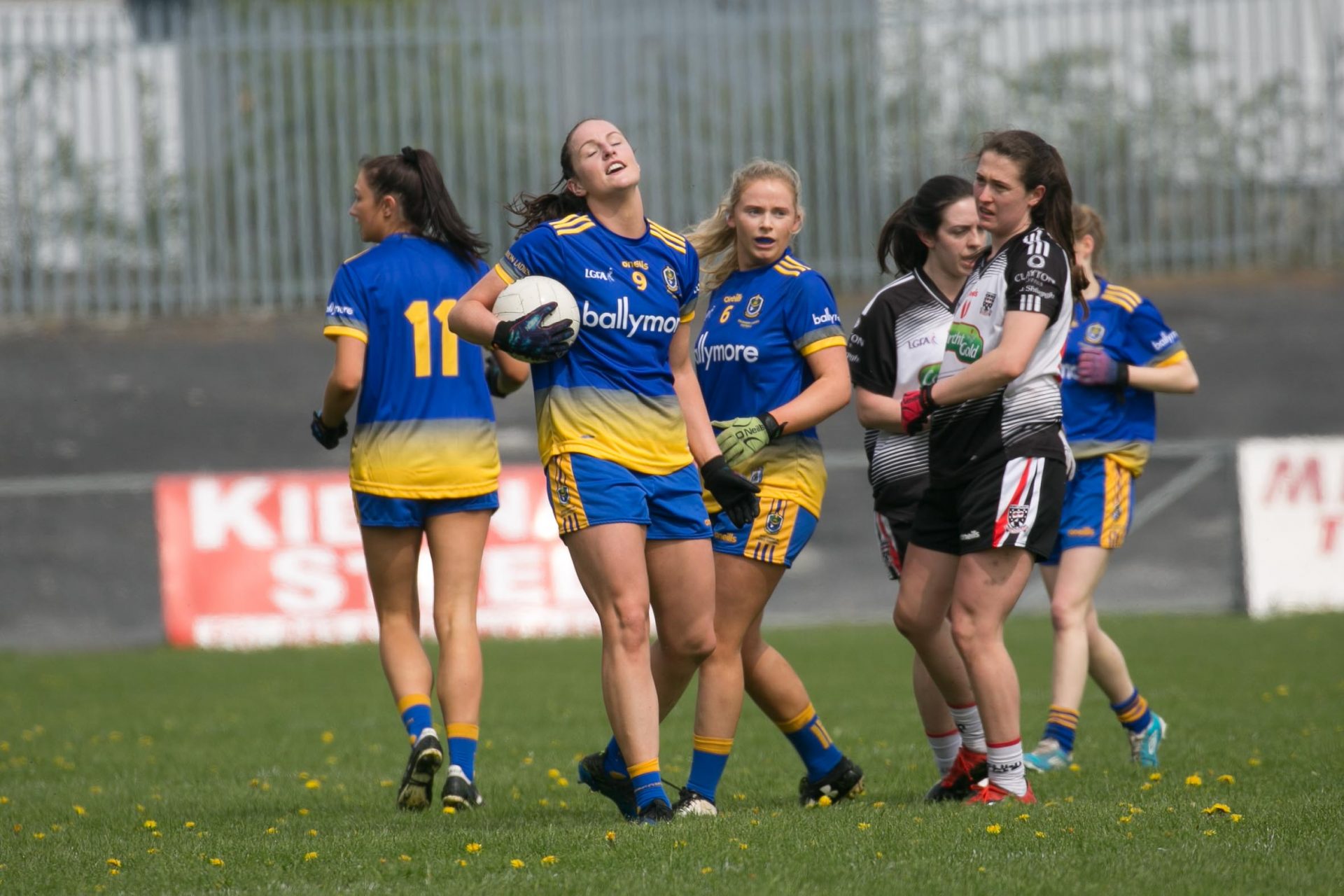 Jenny Higgins shows her disappointment at the final whistle as the Roscommon intermediate ladies’ team are edged out by Sligo on Saturday last. Picture: Michelle Hughes-Walsh

For most LGFA county sides, managing the gap between the league and the championship is no easy feat, as the gap between games can be anything up to nine or ten weeks. However, Michael Finneran will feel that the four-week gap to Roscommon’s provincial championship semi-final is the bare minimum he needs to steady his side’s ship after Sligo outplayed his charges by far more than the final three-point margin suggested in last Saturday’s league semi-final.

There remains sufficient talent and ability in this group to test most, if not all possible opponents at intermediate level in the championship. Yet there were red flags all over the field here.

Defensively, Roscommon’s performance was mixed. Four of the six Sligo forwards will feel that they ended the game having edged their individual battle, but given the amount of pressure that was exerted due to Sligo’s vice-like grip on primary possession, that’s excusable. That said, it will be noted that aside from scoring 12 times, Sligo shot ten wides, dropped five shorts short and drew a stunning save from Helena Cummins in the first half.

Instead however the main focus could be the battle for restarts, where Sligo’s Noelle Gormley seemed to be able to pick out colleagues in space with relative ease, while Roscommon went long more often than not and usually found themselves outfought and outnumbered when they did so.

The issue of team discipline remains a huge problem. In the round robin meeting between the sides, Roscommon struggled after picking up three yellow cards, and history repeated itself here. All three players that were sanctioned (Kelly, Cummins and McLoone) could argue that they got the wrong end of close calls, but as Finneran himself stated after the game, “they gave the referee a decision to make”. Certainly a look at the other games in the league would suggest that in terms of keeping 15 on the field, Roscommon struggle more than most.

Throughout the league and indeed through last year’s run to an All-Ireland semi-final, Roscommon’s ability to run hard and effectively from midfield and half forward was a key weapon in their arsenal. Here, Sligo completely shut that down as Alice Kelly and Laura Fleming struggled to get up a head of steam, with only Rachel Fitzmaurice making any impression in that sector in her brief cameo appearance at the end of the game.

Overall, it was a poor outing, one that made it hard to imagine that Roscommon’s freewheeling, 4-17 performance in last year’s provincial final came against these same opponents just ten months ago.

From the start, it was evident that a tally like this wasn’t going to be repeated by either team. In glorious sunshine and with no wind, the football failed to match the surroundings and a litany of unforced errors came from both sides.

Roscommon’s 0-3 to 0-1 lead after ten minutes, with Jenny Higgins’ point the highlight, was a reasonable start. That didn’t last as from then until first-half injury time, Sligo added two scores and Roscommon drew a blank, before late points were exchanged to make it 0-4 each at the interval.

The crucial phase of the game was immediately after half time when Sligo scored 1-2 without reply, despite playing most of that spell with just 14 players due to Bernice Byrne’s yellow card. Emma Keavney and Jacqui Mulligan pointed for Sligo to put the Yeats County two points up for the first time in the game, before the key moment came after 39 minutes when Roscommon goalkeeper Helena Cummins fielded a high ball but was deemed by referee Des McEnery to have barged through Katie Walsh as she attempted to clear her lines. Cummins was shown a yellow card and Walsh duly brushed herself off to slot home the penalty, putting Sligo five points clear.

Some errant shooting from the Yeats County girls allowed Roscommon to stay in touch despite their inability to secure a healthy share of possession. Then, when Rachel Fitzmaurice was introduced, she made an immediate impact, setting up a possible smash-and-grab victory.

The dual player burst past two defenders and then sidestepped Noelle Gormley in the Sligo goal with her very first possession. Her shot under pressure rolled towards goal slowly and might have been cleared off the line, if Siobhán Tully wasn’t on hand to add a final touch.

After playing second fiddle for most of the game, Roscommon were now just a point adrift. Sligo were unperturbed however and they calmly tacked on three late points to secure the win — the pick of the bunch a lovely dummy and shot from Katie Walsh that will be a centrepiece of an otherwise scant highlight reel, one with very few high points for the losing side.

Red Cards: Sligo – none; Roscommon – none.

Kerry footballers were the first to bring the phrase “hammer the hammer” into popular usage, and it was entirely appropriate for what happened here. Most of the key players that Roscommon would look to for leadership were dominated by their direct opponents, none more so than Joanne Cregg, who never got into the game. Mainly this was due to the tireless effort of Laura Ann Laffey, who was superb on the ball, always purposeful, and diligent in her defensive duty when Roscommon were in possession.

Michelle McNamara comes a close second after completely shutting down Rebecca Finan, who came into this game as the top scorer in the division, while Jacqui Mulligan, Ruth Goodwin and Katie Walsh were also very impressive.

Jenny Higgins had some good moments for Roscommon, while wing backs Niamh Feeney and Shauna Bannon also emerged with credit. It would be harsh to criticise Siobhán Tully for her performance as she did well with the deliveries that suited her, though all too often her colleagues inexplicably tried to send high balls in on top of the smallest on player on the field.