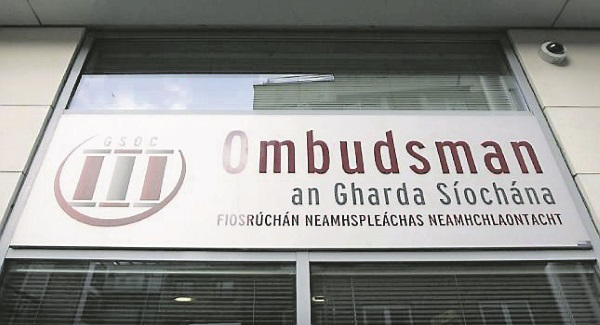 GSOC sent 17 criminal investigation files to the DPP last year, but directions to bring charges against gardaí have so far been given in just four cases.

The GSOC Annual Report 2018 showed that the State prosecutor ruled against charges in nine of the cases, while decisions are awaited on four other files.

In addition, the DPP decided against prosecution in a case that was awaiting a decision at the end of 2017.

The four prosecutions include charges of assault causing harm, dangerous driving and assault.

Cases that concluded last year, relating to files sent by GSOC to the DPP before 2018, include one where a garda was given a two-year jail term for sexual assault.

He was served with dismissal papers but offered to resign and his resignation was accepted. In a second case, two gardaí received an adult caution for assault.

The Garda Commissioner imposed 74 sanctions for breaches of discipline following complaints to and/or investigations by GSOC.

These include two cases (still ongoing) in which GSOC only learned about the incidents in the media.

One concerned the temporary loss of a garda sub-machine gun from an official garda vehicle and its return by a member of the public.

A second concerned a member of the public gaining access to Áras an Uachtaráin, walking through the front door and confronting President Higgins. The front gate is manned by gardaí.

There were 38 referrals by the Garda Commissioner in situations where the conduct of a garda may have resulted in the death or serious injury of a person. Fifteen of these were fatalities, five relating to road traffic accidents.

Gardaí implicated were cleared in the bulk of cases. Only four files were sent to the DPP, which directed charges in just one.

Rape complaint: A woman complained about a failure to investigate a reported rape. She made a statement to two gardaí, but it was not investigated nor any contact made with her afterwards.

An investigation by a garda superintendent, supervised by GSOC, found that the investigating garda took a statement but did nothing further.

Records showed the garda received 15 separate reminders to progress the allegation, but none were acted upon.

Failure to investigate: Five gardaí were found in breach of discipline for failing to investigate crimes relating to harassment, criminal damage and anti-social behaviour (and of not recording the crimes). The reported crimes had spanned a three-year period.

The five gardaí were found in breach of discipline. One of them didn’t submit his file for seven months after the complaint (meaning it was out of time for a summary prosecution), while another garda failed to locate CCTV or witnesses and did not record the incident. Another garda failed to record an allegation of assault and verbal abuse and did not prepare an investigation file.

Complaint of assault: On foot of an allegation, a GSOC officer investigated a complaint that a garda assaulted a man. The officer found the custody area of the garda station was not covered by CCTV. Allegations were denied and there were no independent witnesses. On foot of a GSOC file, the DPP directed the garda be prosecuted – the garda was tried and found not guilty.

Sexual assault complaint: A woman complained about how she was treated when she reported being sexually assaulted. A superintendent was tasked with the investigation under GSOC supervision and found no breach of discipline. The supervising GSOC officer viewed the DVD of the interview. The officer said the garda complained of had “repeatedly interrupted the woman, had used inappropriate language and was aggressive towards the complainant”.

Neglect of duty: A complaint was made on behalf of a child injured in a road traffic incident, that a garda failed to investigate it. Numerous calls were made to the garda to make a statement. When the garda did, five months later, the garda did not know important details. Ultimately, the driver involved in the RTI was not prosecuted. GSOC investigated and found the member in breach of discipline for neglect of duty.

Gardaí were called by family members to a house where a man had attempted suicide: Gardaí decided to detain him under the Mental Health Act and handcuffed him for his own safety and that of others. The man became unresponsive and was pronounced dead in hospital. A GSOC investigation found no culpability with gardaí.

GSOC investigated a case involving a woman who, prior to her death, was in contact with gardaí: Following a call, gardaí located a woman, reported to be intoxicated, and drove her to a house she identified as her home. They left her there and resumed their duties. Sometime later the woman walked from the location and was hit by a vehicle and killed.

The GSOC investigation found the gardaí had responded to concerns about the woman and to ensure her safety had driven her home. GSOC said they had no reason to suspect that the address she gave for her home was incorrect. GSOC found no breach of discipline.

Gardaí referred a case to GSOC involving three members of a Garda Regional Support Unit who used their tasers in a family home: The RSU was sent to the house after a call that a person with a knife was threatening to hurt herself and her partner. When they arrived the door was opened by the woman who had called. Her partner then emerged with a knife in her hand. Gardaí demanded she drop the weapon and when she lunged at them all three members discharged their tasers. GSOC determined the discharge was lawful and that the RSU members acted proportionately in the circumstances.

Discharge of weapons: GSOC investigated a case where gardaí were attempting to intercept a car in which the occupants were believed to have a firearm. After arresting one of them, the gardaí fired their weapons believing they were in danger due to the aggressive driving of the second man. GSOC found the discharge was “legal and necessary”.