From the Atlanta Olympics to Dr. Hyde Park 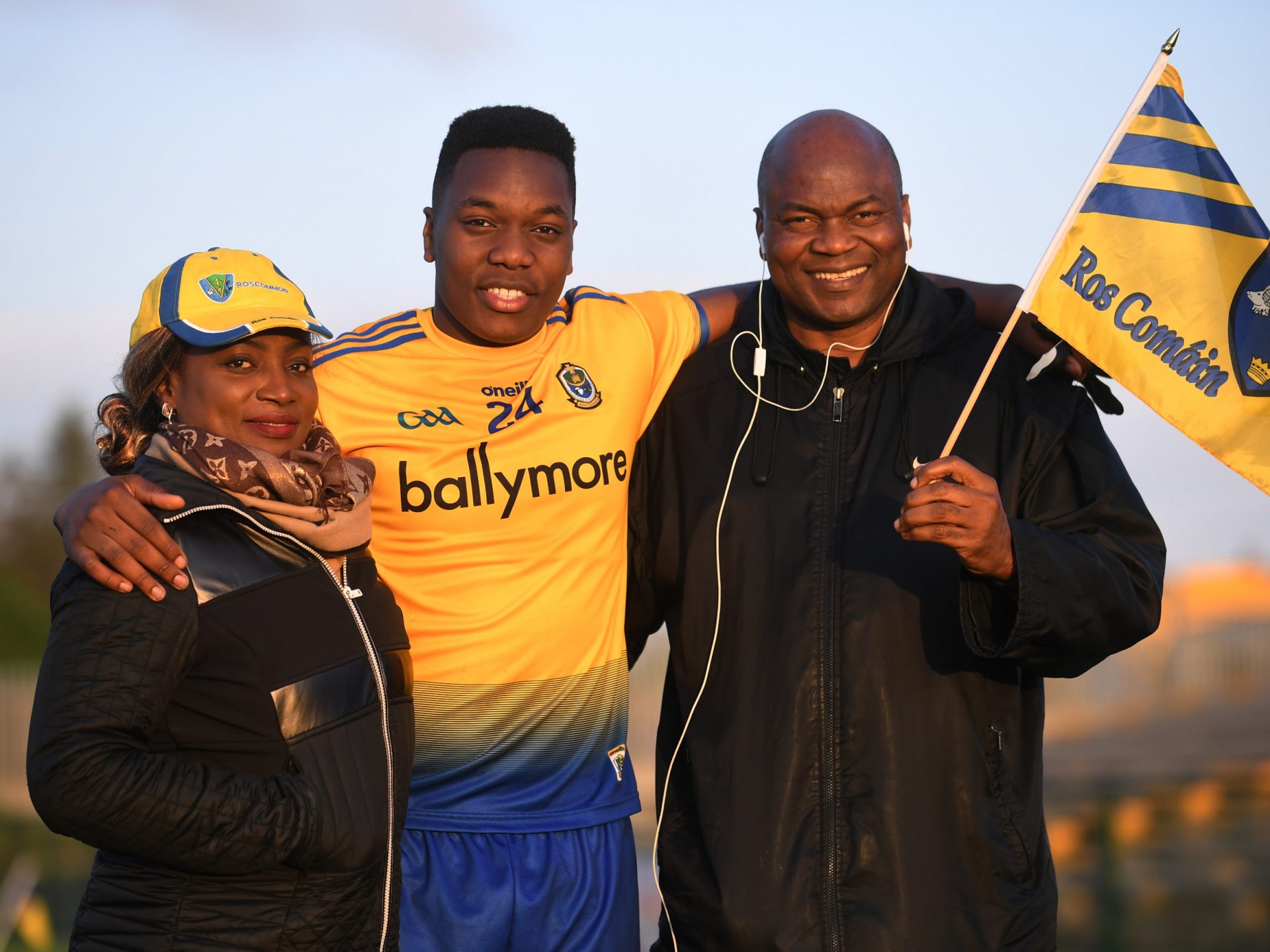 Twenty-three years after representing Nigeria at the Atlanta Olympics, Moses Oyiki tells Roscommon Herald Sports Editor Ian Cooney that watching his son Aaron lining out for the Roscommon minor footballers has been an uplifting experience…

Moses Oyiki rises to his feet, waving his hands in a frenzied celebration. High up in Dr. Hyde Park’s main stand, he salutes his son Aaron’s 37th minute goal that pretty much knocks the stuffing out of Leitrim. The Roscommon minors can relax now in the knowledge that they’ll see out their latest championship encounter comfortably.

For Aaron, it’s another two goals to compliment the thunderbolt he delivered against Galway at the same venue two weeks earlier, a score that subsequently went viral on social media.

The Clann na nGael footballer is causing quite a stir. Apart from being the first black player to play championship football for Roscommon, “the big fella”, as he’s become known, stands out from the crowd due to his sheer power and physique.

But sporting achievement runs deep in the Oyiki household. For Moses ‘Orode’ Oyiki, 1996 was the pinnacle when he represented Nigeria in the 110 metres hurdles at the Atlanta Olympics Games. He finished sixth in the second heat, running alongside eventual bronze medallist Florian Schwarthoff from Germany. He posted a time of 14.04 in a race that also featured Seán Cahill from Ireland.

Six years later, Moses and his wife Dafe, who also played international hockey for Nigeria, would move to Ireland, eventually settling in Monksland in South Roscommon.

They have four children — Valerie, Aaron, Josh and Michael. Moses runs his own business, Aaron Solicitors, based in Dublin, named after his late father and, of course, his son who is making a name for himself in Roscommon colours.

The decision to move here emanated from stories Dafe had heard about Ireland from the Irish principal of her secondary school in Nigeria. The idea of raising a family here appealed to them. It’s a move they have embraced. South Roscommon is their home now, and they love it.

Moses, from Ughelli, a town in Delta State, Nigeria, and Dafi, from Warri, met at the African Games in Harare in 1995, where Moses won a bronze medal. Their relationship subsequently blossomed and they were married two years later.

Education and sport are inextricably linked in Nigeria, and so it was, ironically, that a lectures’ strike at the University of Benin, where Moses was studying law, allowed him to concentrate fully on preparations for the Atlanta Olympics.

He admits that was a relatively late starter to hurdles.

“I used to run the 100 metres and do the long jump. Then, at a sports day in secondary school, I tried the hurdles. I looked at them and thought to myself ‘I could do that’. So I borrowed shoes with spikes from someone and ran the race, which I won,” he recalled.

It’s interesting to listen to Moses list all the high-quality races, mostly in Africa, that he took part in. Yet he draws the conclusion that there are regrets over unfulfilled potential.

“If I was competing for one of the top countries, I would have been world champion, no doubt. I had a brilliant hurdles technique. I could just glide over them,” he pointed out.

An opportunity to make the Barcelona Olympics in 1992 was within reach but he ended up watching the Games on television.

“I won the National Trials in 1990. I represented Nigeria at the World University Games in Germany. But there were issues with Nigerian officials in 1991. I was very vocal and spoke up on behalf of the other athletes. It felt as if they were holding us back. We weren’t getting the resourced we needed,” he explained.

Once again in 1993, Moses won the National Trials and represented his country at the African Championships in Durban, South Africa — the first time the championships were held in a country on the cusp of ending apartheid.

The arrival of highly-renowned Cuban coaches had procured a physical and psychological edge that entitled Moses to feel he was primed to embrace the 1996 Olympics following preparations in Cameroon and Savannah (Georgia). The reality was somewhat different.

“We were inexperienced. It turned into a jamboree, and it’s only when you are there that you see how other athletes are conditioned in terms of their preparations and their diet. I also had a minor injury, so I had to deal with that,” he remembered.

After Atlanta, Moses set his sights on the 2000 Olympics in Sydney but, once again, uncertainty and frustration set in.

“I eventually became disillusioned with it. We went to a training camp in Adelaide. My focus was on the Oceania Games but, for some reason, officials weren’t entering me in the races that mattered. I needed to be competing against athletes of a similar standard but I ended up with no competition. Eventually, I just wanted to wash my hands of it.”

When it’s suggested to Moses that he has his own Wikipedia page on the back of his athletics career, he laughs, pointing out that his date of birth on the page is actually the day he started primary school. He turned 54 on Saturday last, although competing at the highest level hasn’t aged him.

Despite the ups and downs alongside the politics sometimes attached to sport, he agrees that becoming an Olympian, and the journey that it took to get there, afforded him the opportunity to see parts of the world that wouldn’t have been possible otherwise.

“I was Sportsperson of the Year at the University of Benin in 1989, so my accommodation was paid for. I’ve seen some beautiful parts of the world. I have lots to be thankful for,” he enthused.

The baton has since been passed down to Aaron, and Moses will call on his experiences to ensure that his son strikes a proper balance between realising his potential in Roscommon colours and his education.

“He has played a lot of different sports. He’s done Community Games, soccer and rugby with Buccaneers. For now, it’s Gaelic football.

“I remember Tony Henry collecting Aaron from the house and bringing him up to Clann na nGael when he was younger. He was a defender back then. He would just throw out those hands to stop the ball. Now’s he at midfield or in the attack.

“For me, it’s about encouraging him to play whatever sport he wants to play. He’s very versatile and he’s obviously very strong.”

However, the competitor in Moses warrants that Aaron takes his sport, and education, seriously — that he trains, plays and rests properly.

“There’s no point in me driving him all the way to Roscommon if he’s not going to be the best he can be. I always stress the importance of discipline to him — of warming up properly, of eating and resting properly, of being focussed and not being fazed by anything.

“I remember getting up at 4 in the morning, if I had been out the night before, to do hill runs to get rid of whatever toxins that were in my body. If there was no pain, there would be no gain.

“On the start line, I would look at my competitors to see who was going to beat me today. I always believed that I would be the best. I want the same for Aaron — that he does the best he can in his education and sport, and that he has no regrets afterwards.”

Aaron Oyiki has made a pretty good start. Inevitably, a degree of fame and publicity has accompanied his introduction to life in a Roscommon jersey. A chip off the old block, he’s already giving his father a run for his money.