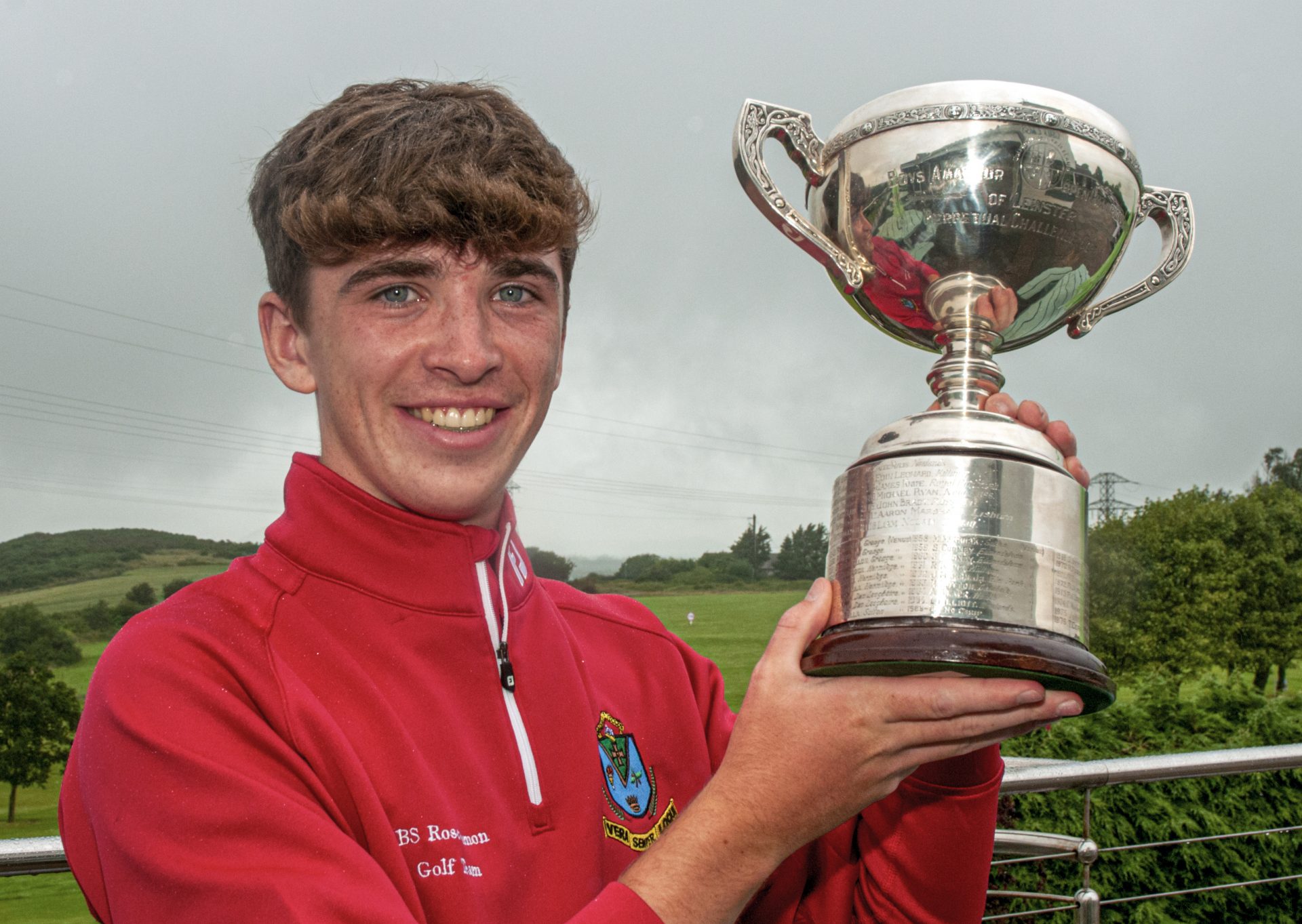 Simon Walker enjoyed the biggest win of his burgeoning golf career last week when he was victorious at the Leinster Boys (U-18) Amateur Open Championship held in Waterford Golf Club.

The 18-year-old produced a flawless display of golf on the back nine on the final day of the three-day competition last Thursday to edge out Josh Macklin from Dundalk by two shots.

Previous winners of the trophy include Padraig Harrington, Shane Lowry, Des Smyth and Philip Walton, underlining the prestige associated with the competition and the illustrious company the talented Roscommon CBS golfer now finds himself in.

“I didn’t make the cut last year, so come back and win it this year was great,” a delighted Simon told the Herald.

A hat-trick of birdies on the 10th, 11th and 12th holes edged Walker ahead but Macklin had established a one-shot lead heading up the difficult 18th.

“He had the honour (of hitting the first tee shot) and I could see that he was in trouble off the tee. So, I could afford to play it safer. He ended up with a triple bogey and I made par,” explained Simon who has a handicap of +1.

Simon received a hero’s welcome at Roscommon Golf Club on Thursday evening where family, friends and members gathered to congratulate their latest champion. Junior golf has never been stronger in the club, with Thomas Higgins winning last year’s Ulster championship.

Son of Johnny and Carmel Walker, who are also members of Roscommon Golf Club, Simon believes that last week’s triumph can be a stepping-stone to more good days around the golf courses of Ireland and beyond.

“I’m hoping to make the Irish team for the Home Internationals in August, so this won’t do my prospects any harm.

“I was making too many mistakes in previous tournaments, so the aim was to try and eliminate them. Hopefully, I can be a more confident player going forward,” he said.

No surprisingly, Simon lists traits like patience and hard work as central planks in the life of any successful golf player. He practices six days per week and visits his coach, Xavier Medas, at Castle Dargon Resort regularly.

In September, he returns to Roscommon CBS for his Leaving Cert year alongside the chance to help the school retain the All-Ireland Senior Schools’ Championship it won two years ago.

For now, the afterglow of Simon Walker’s greatest individual triumph burns brightly. Part of a special crop of talented golfers plying their trade in Roscommon Golf Club, winning last week’s Leinster Boys Amateur Open Championship may be a sign of things to come.