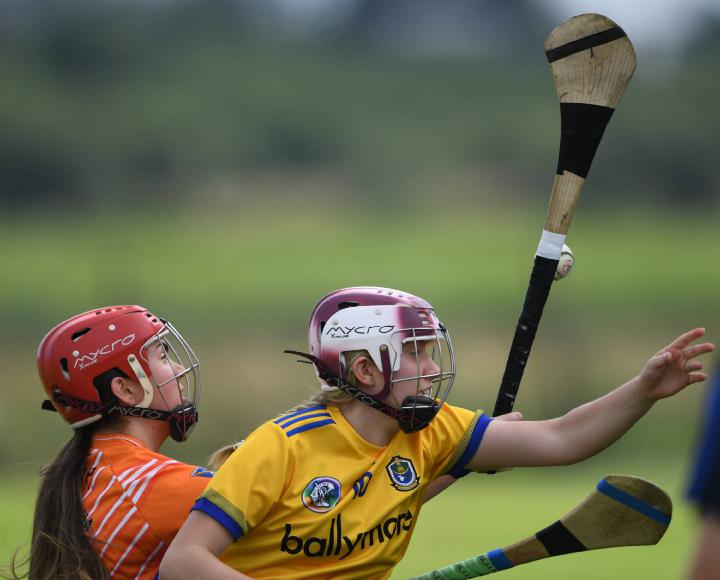 The sliothar eludes Alisha Lenihan during last Saturday’s clash with Armagh at Rockfield.

Just two years ago, Armagh travelled to Knockcroghery for what was a de facto quarter-final of this championship and they recorded a comprehensive win, prevailing by 12 points.

That result seemed a world away last Saturday evening in Oran as Roscommon turned the tables in spectacular fashion in an equivalent fixture, their comprehensive victory build on the foundation of a superb third quarter when the home side fired over 10 points in just 15 minutes of play.

Player turnover was certainly a key factor in the transformation. A dozen Roscommon players hurled in that 2017 fixture and again last weekend, while on the Armaghside, only Eimear Hayes and Ciarraí Devlin (who was goalkeeper two years ago and full-forward on Saturday) started both contests.

Yet no less significant was the simple effectiveness of Roscommon’s attacking play from midfield and half-forward in this game. An away win over Clare was a huge boost in confidence and that was easy to see at Rockfield, where seven of the eight starting forwards and midfielders for Roscommon scored from play, while the other — Chloe Whyte-Lennon — was forced to move to corner back after just five minutes, where she played a starring role.

“If we were playing last week, Chloe was touch and go, but today she was outstanding. She does what she’s told and she was my player of the match today, she came out with balls that she shouldn’t have won,” was the verdict of Roscommon manager Karol Collins on her performance.

Collins switched Whyte-Lennon to corner-back following a serious injury to Niamh Farrell in the fifth minute.

After Farrell was helped off the field, Roscommon went from 0-2 to 0-1 down to a point up, with Rachel Fitzmaurice, Alisha Lenihan and Shauna Fallon all on the scoresheet.

That was pushed out to three when Fiona Connell and Kathy Jones added points, both scores resulting from high balls into the full-forward line that broke kindly.

Armagh pegged them back to a point (0-7 to 0-6) at half- time, and it could have been worse had Faye Fitzpatrick been able to deflect her flick on the sliothar from six metres out under the crossbar, rather than over it, suggesting a tense finish.

Ten minutes into the second half, the landscape was completely different. Roscommon had doubled their tally and were producing some scintillating attacking play, led by Niamh Watson at centre forward.

In the first half, the Roscommon sideline tried to give Watson the freedom to drop a bit deeper and to pick up ball and make things happen from the midfield vicinity, but in many cases it just allowed Armagh’s teenage prodigy Gráinne McWilliams to control the game from her role as a deep-lying centre-back.

After the break, that was all changed, and Watson, Alisha Lenihan, and Susan Spillane all ran riot in that sector of the field, creating and converting scores at a rapid rate.

“What we’re trying to do is to get our full-forward line to pull out a bit, maybe get them to puck long out to half forward or midfield where we can attack the breaks,” said Collins.

“In the second half we squeezed up a little bit more, we got our full-forward tight on her (McWilliams) and let their corner-back have the ball. We turned them over three or four times in the second half as a result and got a couple of scores out of it, so little things fell into place.

Points flowed freely, the lead was moved out to nine points and then a wonderful breakaway goal removed any lingering doubt about Roscommon’s win and their reward of a top spot finish in Group One of this championship.

Chloe Whyte-Lennon started the move by working the ball out to safety from her own penalty area, and after the ball passed through the hands of Shauna Fallon and Kathy Jones, it was Niamh Watson who took possession on the left side of midfield.

Sixty metres and two beaten defenders later, she slammed the ball into the roof of the net.

Three minutes later Alisha Lenihan had a second goal when her speculative shot for a point flew all the way to the net and while Rachel Merry tacked on two late points for Armagh, that did nothing to mask the scale of Roscommon’s second-half dominance in this fixture.