A golden moment for Aoife 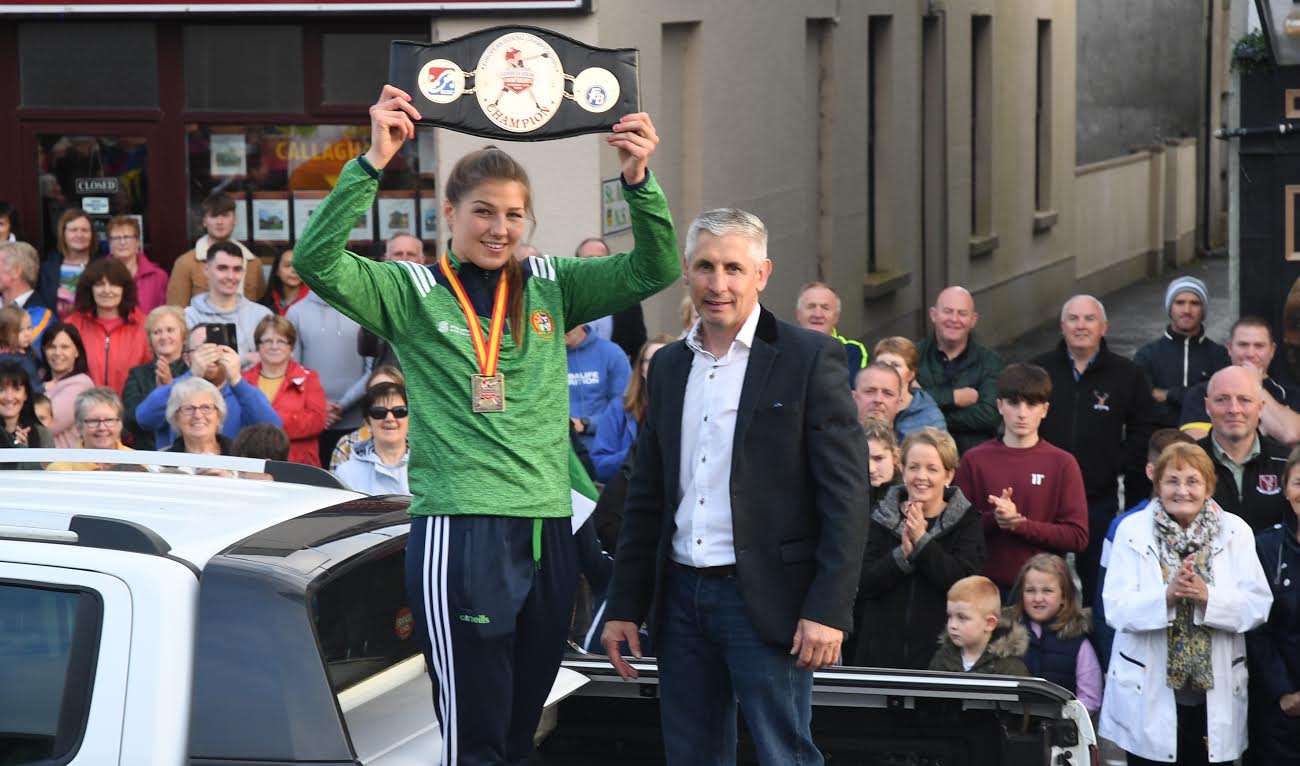 Up to 2,500 people lined the streets of Castlerea on Sunday evening to give a hero’s welcome to a 22-year-old local woman who has become only the second Irish woman after Katie Taylor to win gold at the European middleweight boxing championships.

Aoife O’Rourke from Tarmon admitted to being “blown away” by the messages of goodwill as she came to terms with life as European middleweight boxing champion this week.

She beat Poland’s Elzbieta Wojcik on a unanimous decision in Madrid on Saturday night, and received a welcome fit for a champion in Castlerea on Sunday evening.

Aoife and her coach from Castlerea Boxing Club, local man, Paddy Sharkey, were led through the town to the square by the Castlerea Brass and Reed Band amid jubilant scenes not witnessed in the West Roscommon town for decades.

The roars of delighted supporters could be heard for miles as she held her medal high. On the podium, Paddy Sharkey spoke of how overwhelmed they were with the reception they had received.

He outlined the sense of pride he felt on Saturday night in Madrid as Aoife lifted her gold medal. He paid tribute to all those who had helped them on the path to this success with particular praise being reserved for his family and for local man, Detective Sergeant Kevin Duggan, who is the Irish Embassy’s liaison officer in Madrid.

Joe Hannigan, President of the Connacht Boxing Association, also spoke of his delight at the win, while the president of the Roscommon Boxing Board, Frank Ward, said that it was “brilliant to see Aoife put County Roscommon on the map”.

Aoife’s proud family, parents Kevin and Ann and her four sisters Aisling, Aine, Ailish, and Lisa, were also on the podium and individually spoke of their pride, the amount of hard work she put into training, and how she was an inspiration to all of them with her dedication.

The Cathaoirleach of Roscommon County Council, Cllr Paschal Fitzmaurice, said it was a great day for the town and county. He described the homecoming as “phenomenal” and richly deserved.

As she now aims for Olympic qualification, Cllr Fitzmaurice called on the town and county to get behind her and support her in whatever way they could.

Independent TD Michael Fitzmaurice added his congratulations and called on his fellow politicians to seek greater funding for sporting clubs so that young people like Aoife could concentrate on following their dream without worrying where funding was coming from.

Aoife confirmed that the next step was Olympic qualification. She said she was blown away by the support and was so proud to represent the people of Castlerea, and to win a gold medal for her home town and County Roscommon.