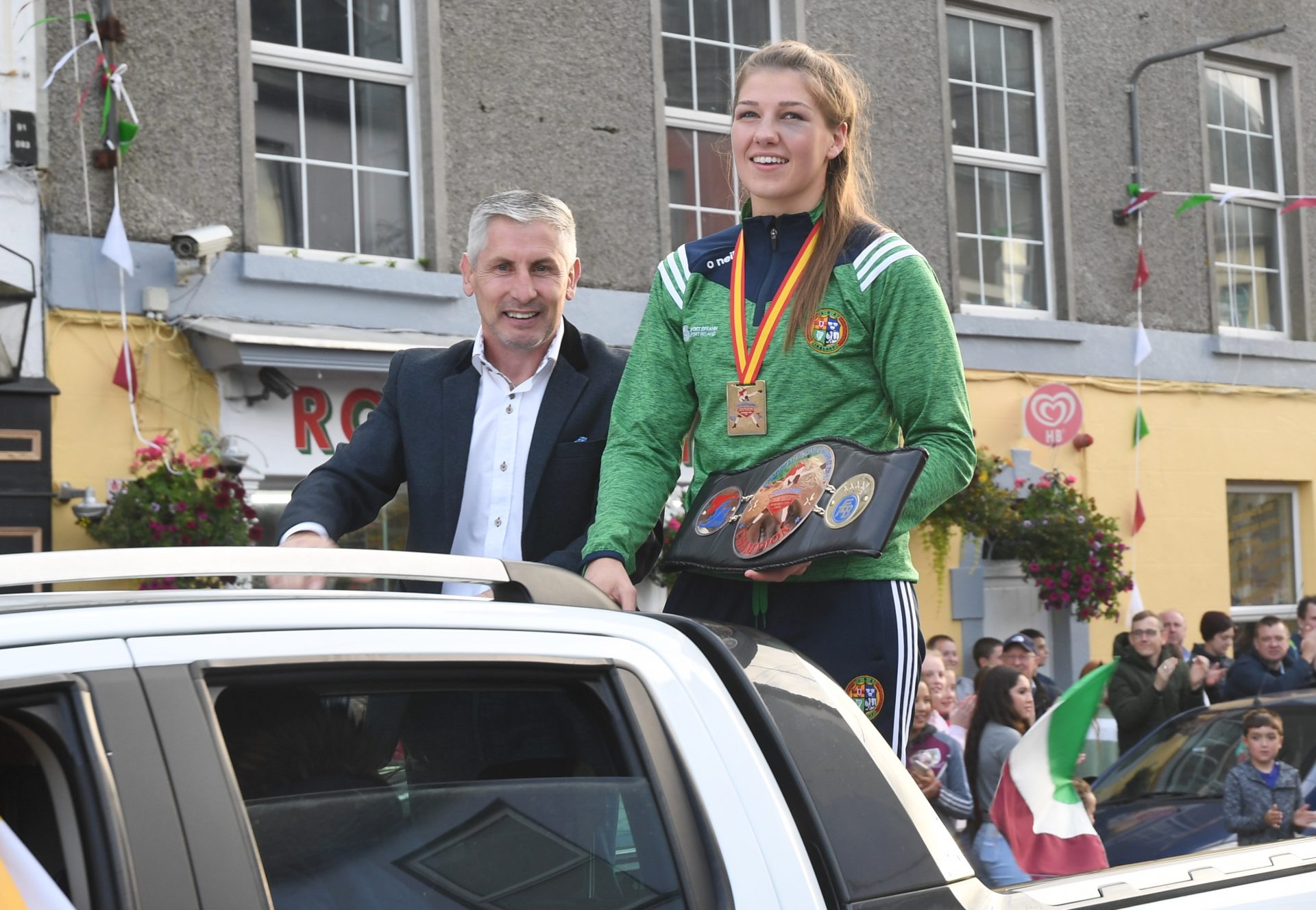 Aoife O’Rourke made a promise to herself ahead of last week’s European Elite Boxing Championships in Madrid — she wanted to stand on the podium and hear Amhrán na bhFiann.

It’s understandable then that Ireland’s latest sporting hero was emotional as she was presented with her gold medal following Saturday’s night middleweight (75kg) final against Elziebta Wojcik.

“I can’t put it into words really. When you’re standing there waiting to be presented with your gold medal, it’s a feeling that not too many people get to experience in life. You think of all the sacrifices, and you realise that it has all been worth it.

“It was very emotional, it’s very hard to describe really. I said to myself before I went out there that I wanted to hear Amhrán na bhFiann,” Castlerea’s golden girl told the Herald on Monday.

It has been a whirlwind few days for the 22-year-old from Tarmon. Realistically, she was always in the hunt for a medal in the Spanish capital, but she admitted that she changed her routine ahead of these championships. Performance, and not the result, was paramount.

“I’ve always believed in my ability. But every competition is different. Sometimes it comes down to who you get in the draw.

“This time I wasn’t focussed on the result. The key was to go out and perform. I wanted to get into the ring and give it my best shot.

“I just felt totally different. We’d arrive in the stadium two hours before the fight and I felt really relaxed. I wasn’t concentrating on winning or losing.

“Paddy (Sharkey) spoke to me before all my fights. The tactics suited me because they were things that I was good at. I was encouraged to be more aggressive,” she explained.

“In 116 fights, she only had suffered two losses. She beat me at the European U-22 Championships earlier in the year, so I think she got a bit of a shock this time too. I just wanted to go into the ring and give it everything. I had to dig deep after the first round, but I got there in the end,” she remarked.

The final against Elziebta Wojcik was, in O’Rourke’s own words, a “sloppy affair”. But the occasion and the enormity of what was at stake dictated the terms of engagement.

“It wasn’t as free-flowing as the semi-final, but everything was on the line. She has been around a while, and there was a lot of holding. Both of us wanted it so much.

“As the rounds went on, I seemed to get more energy. I don’t know where that comes from. There seems to be more diesel in the tank. I could see it in her face that she was tiring, and that gave me even more energy,” she admitted.

“I didn’t really know if I had won the fight. I thought I had done well in the first round, but the judges gave it to her. But I did enough after that to get the decision.”

Alongside her coach Paddy Sharkey, Aoife was heartened by the support received from Kevin and Lisa Duggan from Castlerea who live in Madrid. She also paid tribute to her family — parents Ann and Kevin, and sisters Aisling, Aine, Ailish and Lisa.

“It’s great to have that support away from home. It meant so much.

“My family have been with me every step of the way. I’d be nowhere without them.

“Paddy has been with me since the first day. He knows me. It meant everything to me to win a gold medal for him. Nothing ever phases him. He’s so passionate. Nothing is ever too much for him,” she revealed.

Now that she’s a European champion, the fame that it brings is inevitable. But she’s determined to remain the same unassuming young woman that has been a fantastic sporting ambassador for Castlerea before, even before last weekend’s seismic events.

“I only set up a Twitter account a few months ago. I’m not even sure how to use it.

“The last few days have been mad, just crazy. I received message of congratulations from the President and Katie Taylor who I’ve really looked up to.

“I still feel that I’m the same girl from Castlerea that I was before the championships. I was blown away by the support on Sunday evening when I came home. I was so proud to represent the people of Castlerea, and to win a gold medal for my home town and County Roscommon. I wasn’t expecting a fraction of the support that turned out to greet me.

“But I don’t want anything to change. Just because I have a gold medal, I still have to put in the hard yards and do the same training. I’m not going to be walking around the place with a swelled head. I don’t want any fuss,” she insisted.

O’Rourke’s journey for the rest of the season has yet to be mapped out. The Women’s World Boxing Championships in Russia next month are a possibility, but the Elite National Championships are definitely on the radar in November. Then, the big one — trying to book a ticket to the Toyko Olympics.

That’s what I’m fully focussed on —to try and qualify for the Olympics games at next February’s qualifiers in London and Paris. This will give me confidence. It would be great to get to Toyko,” she concluded.