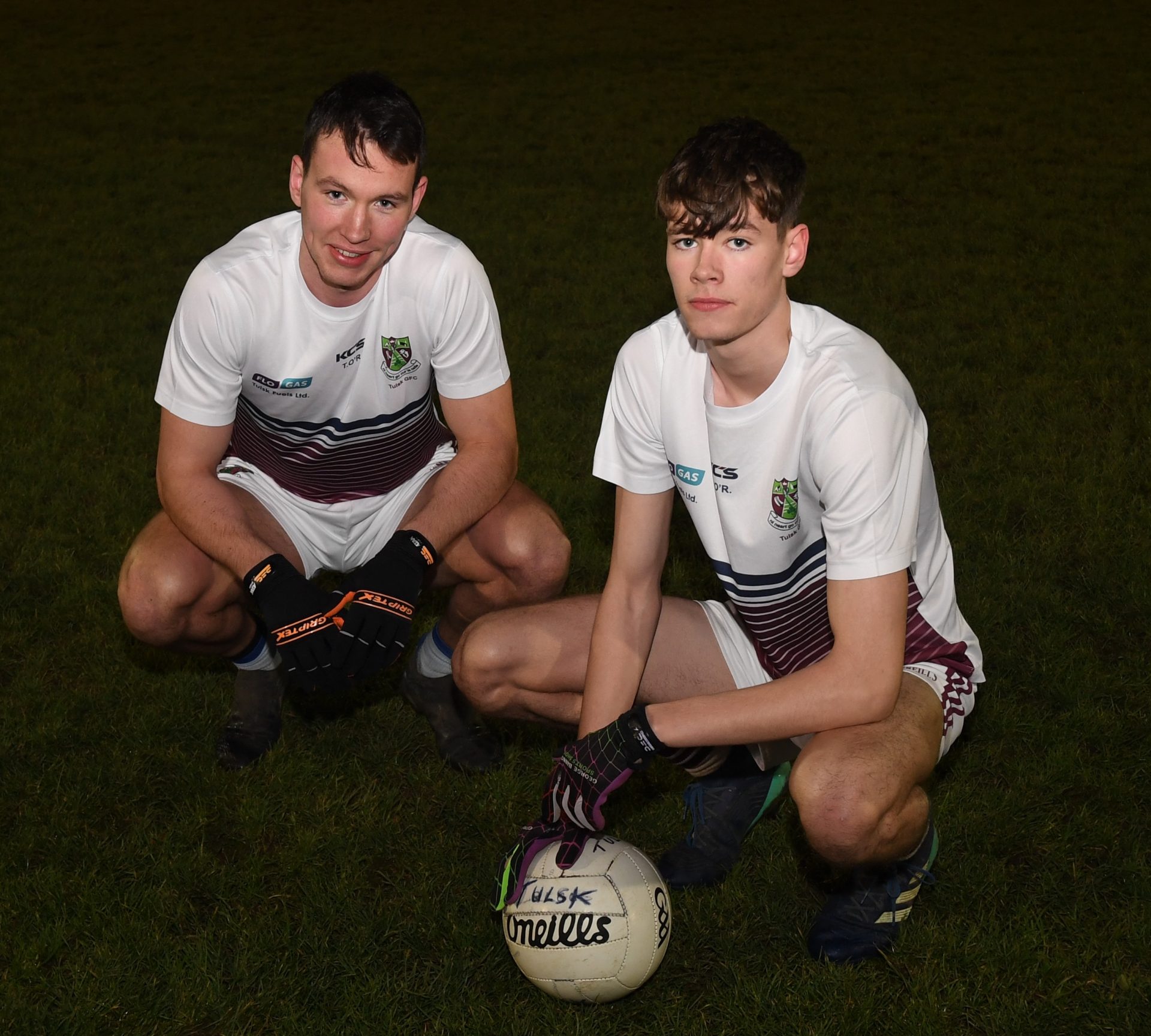 Tadhg and Thomas O’Rourke will be hoping to lead Tulsk to their first intermediate title since 1984 on Sunday next. Picture: Gerard O’Loughlin

Tulsk’s time to deliver or Oran continuing to defy the odds? Whatever the outcome of Sunday’s intermediate football final at Dr. Hyde Park (throw-in at 4 p.m.), a huge weight of expectation will be lifted off the winners’ shoulders. Like gaining promotion from The Championship in England, the lucrative prize will be one worth savouring.

Tulsk have been the form horse, but we’ve been down this road before with a club looking for a first championship triumph since 1984. Beaten by Boyle and St. Croan’s respectively in the 2013 and 2014 deciders, they’ve often set pulses racing by cantering through the group stages, only to implode when it’s least expected.

For Oran, a fifth final, including replays in 2016 and 2018, in three years is a ringing endorsement for their conveyor belt of underage talent. Imagine what they could achieve with a full deck of cards, however? This season, in particular, has hit them hard in the injury department. Yet they’re back in the final, which either highlights their ability to defy the odds or represents a withering appraisal of the other teams in the championship.

Certainly, on the whole, the intermediate grade isn’t as strong as in previous years. Castlerea and St. Dominic’s weren’t at the races in their respective semi-finals, so the best two teams have arrived at the final. Knowing that they could have a presumably rejuvenated St. Faithleach’s for company next season, both sides will be particularly keen to grasp this opportunity.

On paper, it should be straightforward. Tulsk have cantered into the final, posting tallies of 3-16, 1-16, 3-16, 4-18 and 3-15 respectively en route to Sunday’s decider. The closest any team came to them was St. Dominic’s a few weeks ago. Yet when one considers that Dominic’s grabbed two goals inside the opening couple of minutes, it puts Tulsk’s dominance after that on a pedestal. A seven-point victory didn’t flatter them.

Can Oran, searching for a first title since 1997, become the first team to ask questions of Tulsk coming up the home straight? Billy Donnellan’s side certainly have the forwards to strenuously examine their opponents’ rearguard but, in the absence of Tom Fetherston, Paul Kenny, Shane Regan, goalkeeper Matthew Whyte and possibly Gearoid Keenan, not to mention the doubts surrounding Jack Earley, Jack Casey and Eamon Kenny, Sunday could be the day that their rotten luck finally catches up with them.

Yet, watching the likes of Kieran Whyte, Ciarán Lawless, Charlie Carthy, Darragh Walsh and James Fitzpatrick, if they get their hands of enough ball, will be worth the admission money alone. Irrespective of what happens on Sunday, Oran’s future is bright.

For Tulsk, this is their chance. Padraig Scott’s redeployment to full-forward has taken the pressure off those around him. Thomas O’Rourke, brother of intercounty midfielder Tadhg, has been superb this season, an example of the faith placed by manager Gerry Lohan in youthful enthusiasm. Gerry Galvin, Jack Conlon and Timmy Fitzmaurice, not to mention the experience provided by Scott and Tadhg O’Rourke, give Tulsk a balance which makes it difficult to see them being beaten.

But it’s Tulsk’s capacity to throw a wobble that makes Sunday’s final far from a foregone conclusion. Oran’s form has been patchy. They were beaten by Dominic’s and scraped past Oran before producing their best performance of the season against Castlerea in the semi-final, albeit the signs from Castlerea’s previous few games suggested that they were slipping down the ladder.

If Tulsk find a way to scratch their 35-year itch, then it will be their day. If the doubts return, Oran are the one team that they won’t want to see in their rear-view mirror.

But all the form points to a Tulsk victory. If it’s not this year, they’ll never hear the end of it.