Whirlwind week for Carlos off to great start 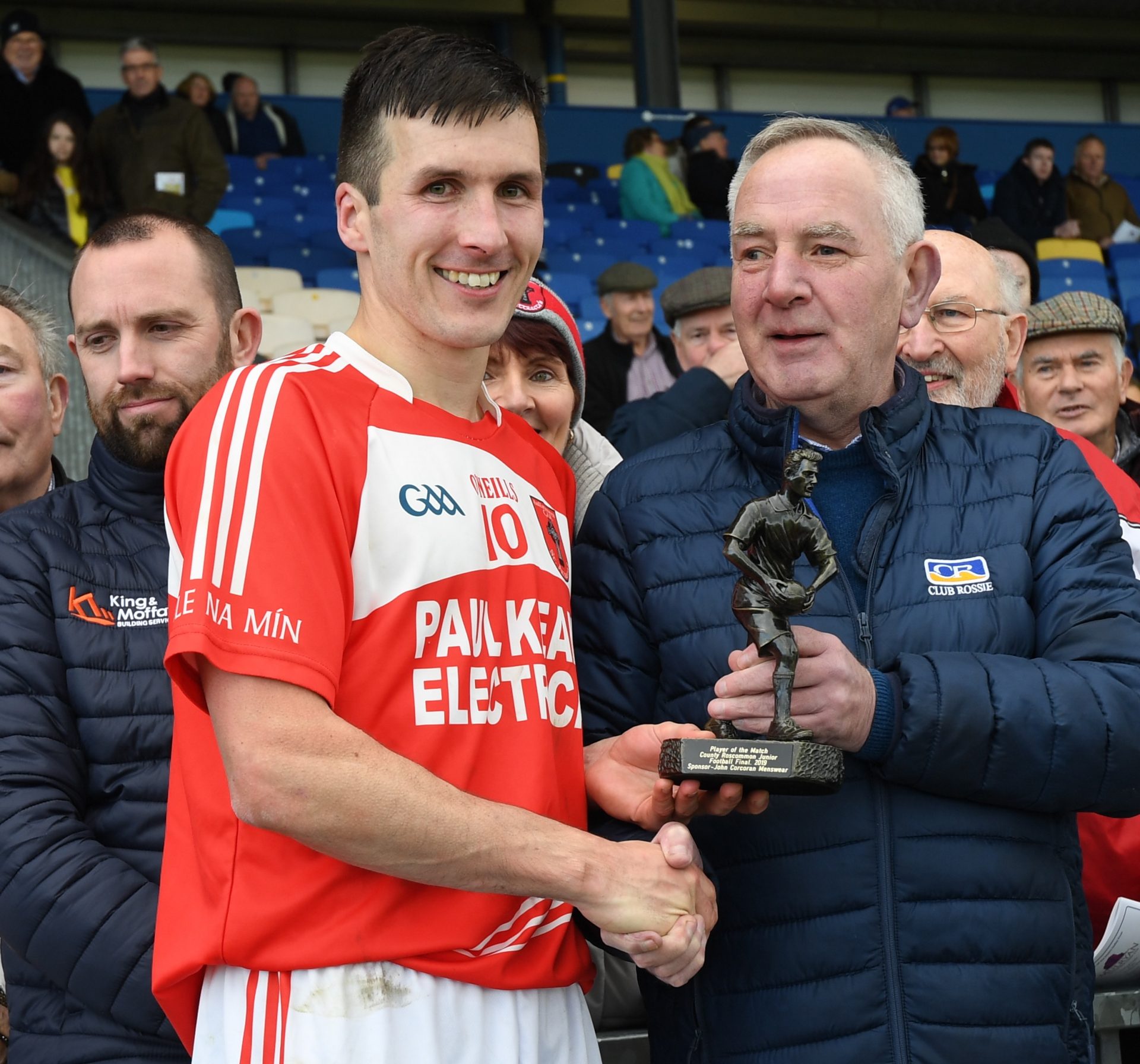 Dessie Carlos should have been halfway across the Atlantic Ocean as he picked up his Player of the Match award moments before captain Peter Keane got his hands on the Conroy Cummins Cup.

Later this week, he will marry his fiancée in New York. Fair to say then that the prenuptial celebrations are in full swing.

“It’s not bad (start to the week). I don’t know what sort of state I’ll be in for the wedding,” he laughed.

“Myself and Ciara are going to New York to get married, just the two of us. I left the dates tight with the final. I didn’t think it was going to run this close to the wedding. Originally I thought there was a two-break between the semi-final and final but it was actually a three-week break,” he revealed.

Ballinameen’s fairytale ending was based around the homework they had done on St. Brigid’s beforehand before putting into practice some of the key targets they had set for themselves ahead of Sunday’s final.

“We knew coming in here that St. Brigid’s were a kick passing team. They would try and get it into their full-forward line quickly. Jack McDonnell is a lovely footballer and we knew that we had to try and curb his influence.

“We played with a sweeper and were quite defensive in the first half, especially as they had the wind. We wanted to keep things tight, and that’s exactly what happened. We got our goals at the right time and Gary (Hanly) made a few unbelievable saves at the right time. You need that bit of luck to go your way in finals.

“We had a strong wind behind us in the second half. We were four points ahead at the break, so we knew that we didn’t have to force things. We talked about holding on to the ball and taking our chances when they came, and that’s exactly what we did,” he explained.

Despite some poor results earlier in the season, Ballinameen persevered and Carlos talked about how his side were determined to eliminate some of the basic errors that threatened to derail their season a few months ago.

“We got off to an awful bad start earlier in the year. We were on the receiving end of a few bad beatings in the league. A lot of it came from our mistakes, kicking careless ball into our full-forward line. We weren’t minding possession and we were forcing things.

“Patience was a word we had talked about all year — hold on to the ball and play the percentages, and things would happen. And that’s exactly how things panned out today. We didn’t kick the ball in unless we really needed to. We got our frees, and just kept the scoreboard ticking over,” he revealed.

Having soldiered with players of Ciarán Kilkenny’s calibre in Castleknock for a few years, that education stood to Carlos when he returned to Ballinameen colours for the start of the 2018 season.

“I was working in Dublin for seven years. I wanted to learn something different from a football perspective, and I loved it up there.

“But to come back and win a trophy with Ballinameen really is special. It means so much to me. All we talked about all year was winning a trophy, and for it to finally happen — it really is the best feeling,” he concluded.