An American College football player with strong North Roscommon connections has hit the headlines after playing an integral part in one of the sport’s biggest shocks.

James McCourt, son of Ciaran and Margaret McCourt — formerly Margaret Callan from Carrick Road, Boyle — landed a 39-yard field goal on the buzzer as the University of Illinois shocked Wisconsin, a team ranked sixth in the famed Big Ten Conference in America.

James’ grandfather Tom Callan was a well-known rugby player from Boyle, lining out for UCD in 1948 and for Connacht in the 1950s. His second cousin is Ireland rugby player Gary Ringrose.

Having grown up in Dublin, the McCourt family relocated to South Florida in 2006. Once James became a kicker on his school team in eighth grade, the University of Illinois came calling, although he was very much understudy to Chase McLaughlin — the current kicker with the Los Angeles Chargers in the NFL — for the first two years where he is studying finance.

But he bided his time to land the most memorable field goal of his career to send shockwaves through the American Colleges football scene.

“It was bonkers, it was nuts, it was definitely a scene,” as he reflected on the celebrations that accompanied his match-winning heroics.

“Obviously the NFL is something I do work for and I strive for. That’s the dream of everyone, and if the opportunity presents itself I’m definitely going to put everything I can towards that,” the 21-year-old told the Irish Times. 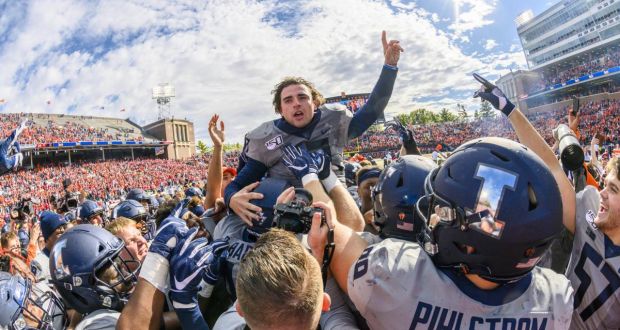