Roscommon U-16s up and running in Fr Manning Cup 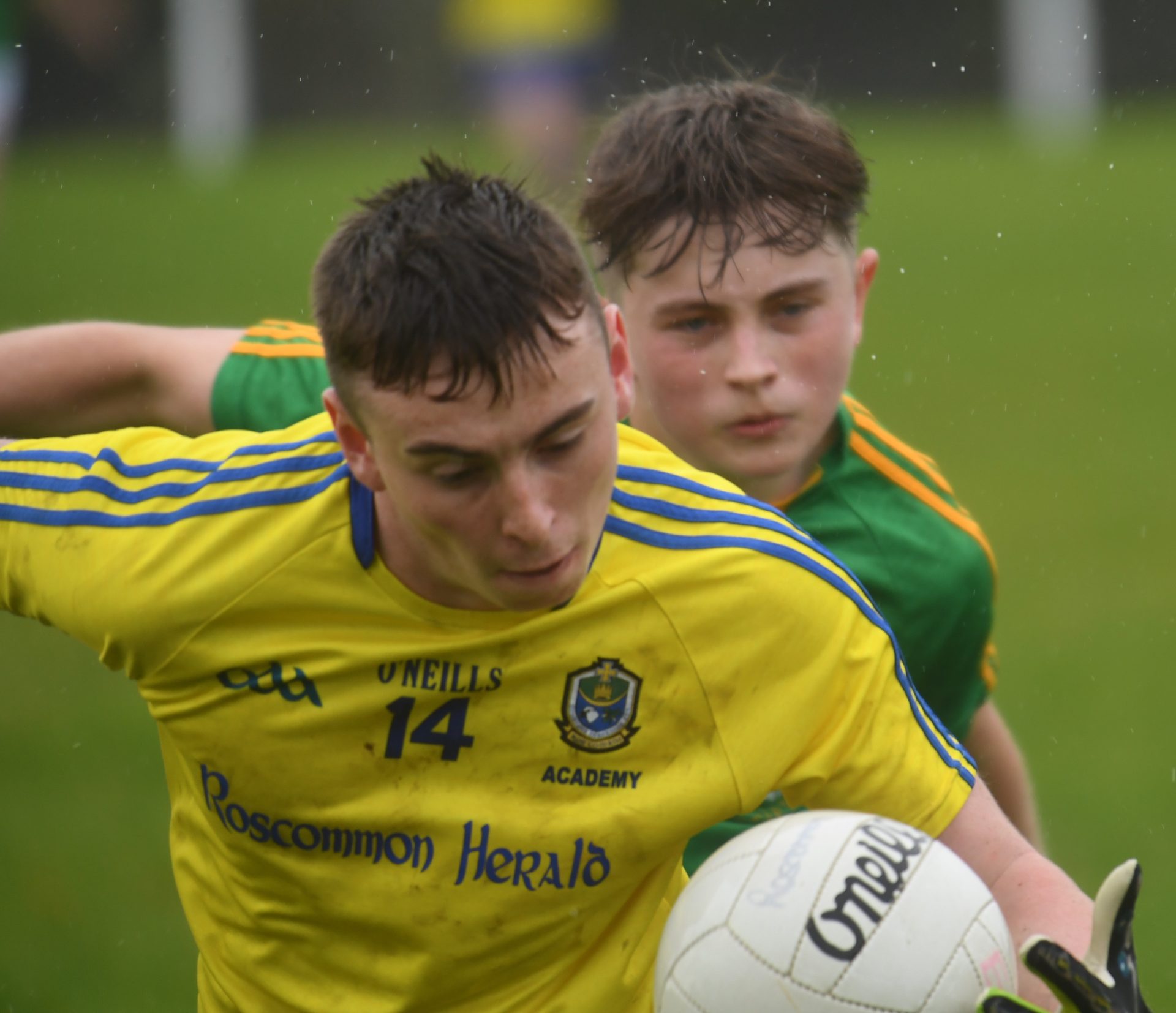 Eoin Colleran was his side’s top scorer against Leitrim on Saturday last.

The Roscommon U-16 footballers showed impressive resolve in the last quarter to fend off a gritty Leitrim challenge in the Fr. Manning Cup at Orchard Park, Elphin, on Saturday afternoon.

This was a morale-boosting win for the young Rossies who had lost their opening match to Offaly. They now must beat Meath in their remaining group match to keep their hopes of making the knockout stages alive.
After a low-key first half, both teams upped their game noticeably to provide an enjoyable second period. After trailing by three points at half time, Leitrim had drawn level by the three-quarter stage and, backed by the wind, looked the more likely winners.
However, Stephen Sheeran’s team responded impressively and reeled off seven points in the final quarter. They were leading by five points entering injury time, only for a goal by Gavin Reynolds in the last attack of the match to give the final scoreline a somewhat flattering look for the visitors.
The home team also gained from a change in tactics as they ran the ball through the lines to telling effect in the second half after their earlier high-ball strategy failed to yield dividends. Slick interplay by Niall Hand, Aaron Shannon, Declan Kenny and substitute Darren Gately created openings and also brought Eoin Colleran, who benefitted from a switch outfield, more into the match.
The Rossies kicked six wides during a scrappy opening quarter in which the only score was a Leitrim point from a free by Oisín Curley in the seventh minute.
Ian Harney got Roscommon off the mark from a free after 15 minutes and Colleran put the home team in front two minutes later following a deft pass from Kenny. Conor Reilly cut through the centre to pop the home team’s third point following a pass from Tom Lennon in the 20th minute. One minute later, Lennon was on the end of a move involving Frank Hester and Colleran to score.

The full-forward stretched the lead to four from a 25th minute free before the home team’s best move of the first-half one minute later. Shannon evaded a few challenges with a slaloming run before placing a pass in front of Colleran who laid the ball off instantly for the in-running Hand to score. Leitrim replied with two points from Conor Quinn to leave three between the teams at half time.
JJ Lipsett kicked over a tremendous point for Leitrim in the 32nd minute only for Shannon to reply with a marvellous individual score as he rounded off a will-o-the-wisp dash with a powerful shot which Conor Flood diverted over the bar.

Then Leitrim reeled off unanswered points from the excellent Quinn (2) and Curley to draw level by the 45th minute.
But Roscommon responded superbly. Daniel Meeley threaded the ball to fellow substitute Gately for the lead point after 46 minutes, while John Shine and Colleran quickly extended the gap to three.

Although Quinn notched a point for Leitrim, Colleran kicked three further points between the 51st and 60th minutes before Seán Martin marked his introduction with a terrific score.

Gavin Reynolds kicked a point and flicked a long ball to the net in injury time, but Roscommon had done enough to earn victory.

Red Cards: Roscommon – none; Leitrim – none.

Aaron lit up a dank afternoon with his dashing runs and slide-rule passes.