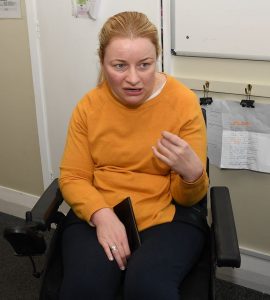 In June 2017, Miriam McNamee and her partner Ken Caulfield returned to Cuisle to celebrate the holiday centre’s 20th anniversary. It was the place where they had first met seven years before during a visit organised by Ataxia Ireland.

Their smiling faces and their comments on what Cuisle meant to them featured in national and local media. They reflected a day where the centre was praised as welcoming and vital.

Now two years later and with tears gathering in her eyes, Miriam pleaded for the centre she loved to be allowed to remain open.

“I come here three to four times a year if I can. I love Cuisle. When I learned about the closure on Friday night, I have to say I was gobsmacked. I thought surely IWA couldn’t do this,” she said.

Before the shock news broke that the centre would close at the end of this month, she, her sister Kifca and her partner Ken were looking forward to a planned visit to Donamon.

“I lay awake on Monday morning and I thought to myself is this a good idea, going down to Cuisle, because I was very upset. All this week I can’t, I can’t fight back the tears.

She said that life with a disability could be quite lonely but that was never the case at Cuisle, a place that was always beautiful, always welcoming.

“Any of the staff that works here do a wonderful, wonderful job,” she said. “They are there for us anytime that we want them. Whenever we need them, they are there.”

During her time visiting the centre, her condition had dis-improved with her mobility being more and more affected,“but every time I come, the staff adapt to what I need.”

While staff continued to do their job in an excellent and professional manner, it was clear they were in pain, she said

Miriam, who is from Meath, recalled ruefully the day of the twentieth anniversary, where accolades were heaped, rightfully so she said, on the centre, including by the CEO of the Irish Wheelchair Association (IWA) Rosemary Keogh.

“How that all has changed,” she said and she was very critical of the IWA.

“Heartless,” she said. “The decision to close Cuisle is heartless.”

Where once it put the needs of disabled people first, that was no longer the case. “I think if Cuisle closes, everybody should question what the IWA does.”

She said that the IWA should have consulted with staff and service users before the decision was taken “but none of that was done”.

“It’s now Thursday, nearly a week later, and no one has asked any disabled people what they think of the closure of Cuisle.”

The IWA proposal of partnering with accessible hotels was also “absolutely” not realistic, she believed.

“I am on disability allowance and when you go to a hotel you have to pay for everything, food, entertainment, taxis,” she said. “Disabled people don’t have money like that.”

“A hotel wouldn’t be able to cater for 40 disabled people, some of whom are very high dependency.”

She asked the government, the HSE and the IWA to not allow the centre to close, and to put themselves in the position of someone with a physical disability.

“Cuisle means so, so much to me. When I started coming here I never saw so many wheelchairs in one room. It was scary at first but by the end of the week, I saw how Cuisle was able to help each and everyone of us.

“If I was to ever get married, it would be here.”

Another visitor to Cuisle, Erica Boucher from Dublin was “heart broken” about the closure of Cuisle and what it would mean for her and other service users.

Speaking with the aid of technology, Erica said she had been a member of the IWA for 15 years

“I am down here at the moment and I am heart broken. The people who have looked after me for half my life are like my family,” she said.

She was very concerned that she would be refused a place in the new hotel model, being mooted as a replacement for the centre, because she required 24 hour care and a nurse.

“I am worried that if I get upset the first time I visit a new hotel, I will be refused another visit. I am going to find it hard to trust new staff.”