All-Ireland champions to bring out best in Pearses 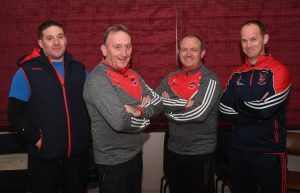 Pat Flanagan (second from left) and his management team will try and lead Padraig Pearses to provincial glory against Corofin on Sunday next. Picture: Gerard O’Loughlin

Experience is a valuable attribute in any setting, sporting or otherwise, but there are few competitions where it’s more relevant than the provincial club championships. At club level, having walked the road before is immensely valuable, and the statistics this year bear that out in particular.

All five of those clubs got knocked out of their provincial championship at the first hurdle.

Pádraig Pearses, who won their first ever Roscommon senior title last month, have defied that trend, going away from home to pick up wins against Tourlestrane and Tír Chonaill Gaels, two sides that know their way around a November championship fixture.

So what’s the difference?

“We’ve got a lot of guys in there that are winners,” is the verdict of club manager Pat Flanagan.

“Five players who have won a Connacht championship this year and they want more. That’s infectious too. I said it the first night we came back training that what we’ve achieved is history. Do we want to live in what was, or do we live in what can be? I think there is an awful lot more in this team and I think there is an awful lot more for this team. That was the approach we took and I think it’s paid off,” he explained.

That’s not to say that it has been plain sailing for the Woodmount-based club. Their trip across the Irish Sea was supposed to be straightforward, and a double scores victory (2-10 to 0-8) would suggest that it was. Flanagan disagreed, however, saying that the goals masked an otherwise disappointing performance.

“To get 30/40 guys over to London wasn’t easy, and to be totally honest I was over there a couple of years ago with Offaly and I thought we were very flat on the day. I felt we were a little bit flat last Sunday as well.

“I did think the boys struggled in tempo around the middle sector of the game but luckily enough we did enough to get across the line. There was never a stage when we were in deep trouble or anything, but we weren’t in control of the game, I felt.

“I thought we were in control for long periods against Tourlestrane and even though we were ahead we weren’t playing as comfortable as we should have been against them (Tír Chonaill Gaels).”

However, the Pearses boss is happy that simply putting those wins on the board will leave his team in a good place going to Tuam Stadium.

“We’ve gone away in the last two games — that will help us going down to Tuam,” he observed.

“This (Corofin) is an exceptional football team but like I said to the boys in London, we’ve a very good team. I would expect this group to become an exceptional football team if they develop over the next few years. We are going out for a one-hour game and if we apply ourselves properly, do the right things initially to make sure we are in the game with 15/20 minutes to go, I think we’ll have a good chance,” he predicted.

For a long time now, finals have been a thing to be feared for Pádraig Pearses. A lengthy anthology of stories of county final heartbreak has been put together, but that’s been transformed now, thanks to their win over Roscommon Gaels.

Breaking that stranglehold was one of the primary targets Flanagan set for himself at the start of the season, and he’s hoping that while the mindset going into a Connacht decider will be different, the same approach will still apply to his team.

“What I did at the start of the year was try to take away the thing about a one-hour final, if we had to get to a final. From the very beginning of the year, we talked about a longer campaign than just the one year, taking away that one-game thing that would have been a fear factor for the players.

“We’ve pushed on from there and we’ve taken the same stance going up to Tourlestrane, to London and we’ll take the same again next week. We are going in there having won our first county final. It’s our first time to get to a Connacht final, so what have we to lose? I would be exceptionally disappointed if we’re not the best we possibly can be.

“Is it possible for us to win it? It is a massive task, but it’s a one-off football match. They have everything to lose, trying to hold on to a competition so they can take part and try to win three All-Irelands in a row. So it’s a massive opportunity for us, they have to protect what they’ve got.

“I’m delighted it’s Corofin that we’re playing. They are the best and I’ve always tried to perform against the best. That’s what it’s all about,” he concluded.