Creggs the envy of other clubs in Connacht 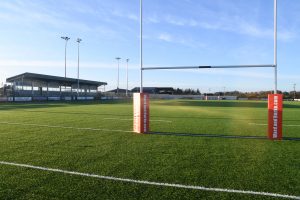 Creggs’ World Rugby-approved 3G pitch, which will be officially opened on Saturday next, is the only such pitch in Connacht. Picture: Gerard O’Loughlin

Creggs’ vision to provide the best facilities in the province for its players and members will be realised next weekend when the club officially opens its new pitches, including the only 3G pitch in Connacht, on Saturday next.

Two years of professional and voluntary effort will come to fruition on a day of celebration, recognising the club’s journey from humble beginnings to one of the most progressive clubs in the country.

Later on Saturday evening, the club will host a celebratory dinner dance in the Abbey Hotel to coincide with its 45th anniversary celebrations where it will honour the successful men’s double winning team of the late eighties and the women’s team that claimed All-Ireland honours in the early nineties.

“This is a huge milestone for us, one of the biggest day’s in the club’s proud history. It has taken a massive effort on everyone’s part to get to where we are.

“For us, the big thing is inclusivity. The club is deeply rooted in the local community, and these state-of-the-art facilities ensures that all our teams are treated equally. If the weather is bad, we’ve our 3G pitch to accommodate games and training. No one will be left behind. As a result, we’re producing a better-quality product,” said Creggs RFC President Aidan Farrell.

Facilities at The Green on the Galway/Roscommon border now include three full-sized floodlit grass pitches and the club’s jewel in the crown — a World Rugby-approved 3G pitch that cannot be found anywhere else in Connacht.

“While it has taken a massive voluntary effort to bring this dream to fruition, we also recruited the expertise of professionals who have a vested interest in the club. It was very important to us that we did that,” continued Mr Farrell.

Saturday’s festival of rugby gets underway at 10.30 a.m. with a mini blitz, followed by a number of games involving youth teams, including girls’ teams.

At 2.30 p.m., the club’s Development Squad will play Loughrea for the PJ Forde Memorial Trophy. At the same team, the third team will play an invitational side that will include a number of former Creggs players.

Following those games, at approximately 4.15 p.m., the three new pitches, including the 3G pitch, a new stand, a new electronic scoreboard and the 1km amenity walkway arounds the grounds will be officially opened.

The club’s first team, currently sitting in second place in the J1A League, will play Buccaneers in a crucial league game at 5 p.m..

“It’s a day for all the community to celebrate. We’ve re-introduced women’s rugby recently, and those teams will be involved in Saturday’s games.

“We hope to have 400 players registered by the end of the year, so the facilities will be put to very good use,” assured Mr Farrell.

Money for the project was raised through a low interest IRFU grant, LEADER assistance and Sports Capital funding. The club also held a huge draw where it sold €10 tickets for 30-odd prizes. It also runs a very successful lotto draw that has approximately 500 members to keep the coffers ticking over.

“I suppose one of the things we’re most proud of is that the development hasn’t crippled the club financially. We rent out the 3G pitch to schools and clubs from other sports. But we’re not dependent on the pitch rental to fund this project.

“As the only club in the province with a 3G pitch, it is very attractive for a number of clubs and we’re hopeful that Connacht Rugby will use it at some stage.”

To underline the club’s growth, it hosted the biggest Connacht Rugby Summer Camp in the province a few months ago where there were 138 children in attendance. But Farrell vows that Creggs will continue to leave a legacy for future generations.

“We have plans in place to construct a gym and changing room facilities for ladies only. Hopefully that will come to fruition by the end of next season,” he concluded.