Public rally to save Cuisle 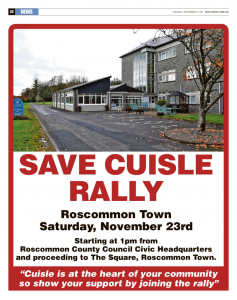 A major public rally will be held in Roscommon Town this weekend as the county shouts ‘Stop’ to the planned closure of the Cuisle Holiday Centre at Donamon by the Irish Wheelchair Association (IWA).

The rally, organised by the ‘Save Cuisle Support Group’ will leave from Roscommon County Council’s Civic Headquarters at 1 pm and proceed to the town Square for a public meeting. Organisers are asking the entire region to come out and support the cause.

A spokesperson for the group told the Roscommon Herald that the “decimation of rural Ireland and the annihilation of supports such as a holiday centre for the most vulnerable people in our society” had to stop.

Messages of support have been pouring into the Save Cuisle Facebook page since the closure was announced.

“The IWA who receive a staggering €40m from State funds annually and a further €20m from public donations annually continue to ignore the wishes of those they were founded to support,” said the spokesperson.

In a separate development, the CEO of the IWA is due before the Oireachtas Health Committee on Thursday, November 21st, to answer questions around the decision to close the facility.

“There are many unanswered questions. The staff at Cuisle, many of whom have long and dedicated service with the IWA, are devastated and believe they have been treated in the cruelest manner just one month before Christmas.

“We ask everyone across the region to show their solidarity and come out for rural Ireland for those most vulnerable and save Cuisle,” said the spokesperson.

At a meeting of the ‘Save Cuisle Support Group’ held on Sunday evening speaker after speaker sent a strong message to the IWA and to Government that this centre at the heart of the community would not be allowed to close.

Local councillors who strongly support the retention of this facility questioned the motives of the IWA in closing Cuisle. The IWA claims that the cost of electrical works needed at the facility are in the order of €1.5m, but the community believes this figure seems to have been “plucked from the air”.

Two of the organisers behind the campaign decided to show their dedication to the cause by getting a tattoo: “It seemed like the least I could do to show some solidarity with the visitors who will be affected by the IWA’s decision to close this centre, and also to show my support to the staff of Cuisle,” said Sarah Brennan.

“I’ve spoken to visitors to Cuisle over the last couple of weeks and they have very real concerns about how the hotel model might work for them.”