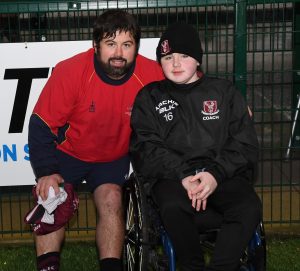 Mattie Corcoran with Archie Naughton at the official opening of Creggs’ new facilities at The Green. Picture: Gerard O’Loughlin

Not for the first time, Creggs RFC put its best foot forward on Saturday last when the club officially opened its new pitches and hosted a dinner dance to coincide with its 45th anniversary celebrations.

The tone was set at 10 a.m. on Saturday morning when over 400 young players turned up to take part in a series of mini blitzes. The day continued with a number of games involving club teams, culminating in the official opening by a number of people representing various strands of the club.

“It was just a fantastic day. We had huge numbers, great games and a wonderful dinner dance that attracted nearly 250 people to round it off. The weekend will stay with people for a long time,” Club President Aidan Farrell told the Herald on Monday.

The Creggs first team’s thrilling victory against a strong Buccaneers side was among a number of highlights, as was the invitational match involving a number of Creggs veterans who “rediscovered their fitness and flair” on the big stage.

“The place was buzzing. It was a very proud day for the club and the community,” continued Mr Farrell.

A cheque for €1500 was presented by Adrian Leddy, on behalf of the club, to Fergus Farrell for the National Rehabilitation Hospital in Dún Laoghaire, Dublin. An auction also took place where €2400 was raised for the IRFU Charitable Trust.

Teams honoured on the night included the 1988 men’s double winning team and the All-Ireland winning women’s side of 1994. Both teams were introduced by Frank Brandon, who penned a fitting poem for the occasion, and Ger Dowd.