A Black Friday for Cuisle? 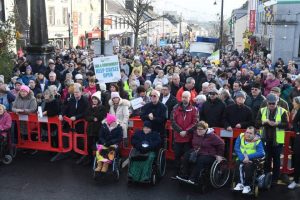 Hands off Cuisle. Up to 2,000 people packed onto the town square in Roscommon on Saturday afternoon as they sent a clear message to the Irish Wheelchair Association on the future of its Cuisle facility in Donamon. Pic. Gerard O’Loughlin

The Irish Wheelchair Association (IWA) is expected to press ahead with the closure of Cuisle on Friday, despite a massive rally in the county town on Saturday and a request by the Oireachtas health committee to pause proceedings.

Following a meeting on Thursday last with representatives of the IWA Chairman of the Joint Committee, Dr Michael Harty has written to the Association asking that it defer the decision to permanently close the Cuisle holiday respite facility this week. Dr Harty has also written to the Minister for Health urging public bodies to engage in a full review of services for people with disabilities “as this will ultimately decide the fate of the Cuisle facility in Roscommon”.

The IWA confirmed on Monday that it received the letter. “Our board will respond to the committee this week,” said a spokesperson. It did not reply to any other questions from the Herald.

At Monday’s meeting of Roscommon County Council, Cllr Orla Leyden proposed that the IWA’s board be invited to meet the council and the county’s Oireachtas members this week “due to the urgency of the situation at Cuisle.

“We need the board of IWA to make a statement on Cuisle. We need to know that they are willing to put a stay of execution on the closure of Cuisle as proposed by the Joint Oireachtas Committee on Health last week,” said Cllr Leyden.

She said the board needed to confirm that a date for an EGM, called for by IWA members, had been set.

Cllr Leyden said shewas becoming more and more concerned that the IWA was acting as an agent for the Government and HSE.

Statements by Minister for Disabilities Finian McGrath endorsing the IWA decision have given her no confidence that the move was not government-driven.

“We need the Minister for Health Simon Harris to confirm that there is no move by the HSE and the Government to cease funding the Cuisle model of holiday breaks and respite,” she said.

“The IWA needs to listen to its members and assert independence as a charity.”

Cllr Leyden said she was happy to support and assist IWA members in calling for an EGM.

Also at Monday’s council meeting, Cllr Tony Waldron called on Minister McGrath to withdraw his support for the decision to close Cuisle.

The IWA said Cuisle is in need of electrical installation and fire safety upgrades, which will cost at least €1.15m.