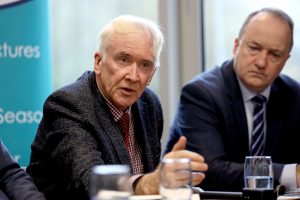 Kilmore clubman and CPA member Tommie Kenoy has called on the GAA’s top brass to consult with its members to allow them mandate their Central Council delegates on the Fixtures Committee Task Force’s recommendations on fixtures. Picture: INPHO/Bryan Keane

The fixtures crises in the GAA has been described as its “biggest contemporary challenge” at a meeting of Roscommon County Board.

A motion calling on GAA authorities to put proposals drawn up by the Association’s Fixtures Review Task Force to the county’s clubs was passed at last Tuesday’s meeting.

The motion, brought by Kilmore GAA Club and Club Players Association (CPA) member Tommie Kenoy, calls on Croke Park to allow clubs to see the task force’s recommendations and subsequently make a decision on how to mandate their Central Council delegates before a final decision is made.

“What’s happening in today’s GAA is frightening. The Association’s biggest contemporary challenge is the fixtures crises.  That crises will pale into insignificance when the next big challenge hits — professional Gaelic games.

“Professional rugby has shown us the way. The GAA is blindly following suit. If it happens, intercounty players will become employees with the right to free movement. Boundaries and transfer rules, as we know them, will disappear. The most famous amateur sports organisation in the world will join the archives of history.

“It has reached a point where we, as grassroots members, must take back control of our organisation.  Our first task is to get the fixtures crises sorted. To achieve that, we must exercise our democratic power. It’s a huge power but one we don’t use enough,” Mr Kenoy told the meeting.

Mr Kenoy felt that the GAA was being run by a system of “elitist democracy” that kept the ordinary member “outside the decision making door.”

He added that the GAA’s top brass had “played deaf” to repeated calls for action on the fixtures crises.

“Eventually, because club members were making too much noise, they set up a task force,” he stated.

“They filled the task force with GAA insiders, some of them institutionalised GAA insiders, all of whom reside in the Croke Park bubble and appear to have lost touch with volunteers on the ground.

“The task force was a cover to give the appearance of consultation and action. Their real agenda is more of the same — more status quo with Tier 2 added on, to the detriment of the clubs, club games and club players.

“The club fixtures programme is squeezed into tight corners, proved by the fact that we now have to resort to penalty shootouts to crown our county champions,” Kenoy’s statement continued.

The Kilmore clubman claimed that 50 members had responded to submissions invited by the task force.

“Some were outstanding. I have four of the best here in my hand. Any or all, if implemented, would have fixed the fixtures problem.

“Intercounty would get proper status as our main promotional and revenue generating tool and club fixtures would be fixed and restored to their proper community-based status.

“But all 50 were binned. Widespread consultation my foot  it didn’t happen.  Instead, consultation was within the Jones’ Road Pale,” Mr Kenoy pointed out.

The CPA recently withdrew from the work of the task force who have been charged with finding a way to tackle major issues surrounding the GAA’s fixtures calendar.