All to do for Oran against Brigid’s 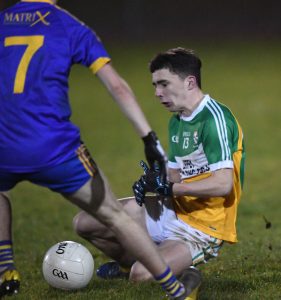 Oran supporters will hope that their team can succeed where Tulsk narrowly failed last Saturday, as they prepare to take on St. Brigid’s in the final of the Dermot Hughes Cars sponsored U-20 Division One championship in Athleague on Saturday at 6.30 p.m..

The Kiltoom-based club started this championship as the hottest of favourites after winning four minor titles in a row, and they copperfastened that status when they posted a comprehensive 2-11 to 0-5 win over reigning champions Clann na nGael last month.

It looked like James Martin’s side were on course to ease into the final when they moved six points clear of Tulsk on Saturday evening last. But 26 scoreless minutes in the second half meant they had to endure a nervous finale before stumbling across the finish line (see page 8 of this week’s Roscommon Herald for full report).

Oran faltered from a strong position in their clash with Clann na nGael but came good with a spectacular late winner for Charlie Carthy, and they will hope that their strength in the full-back and full-forward lines will come to the fore in Saturday’s final.

For many of this Oran group, the memory of the 2017 U-16 final — a game that featured 11 players (eight starters) that played last Saturday night again Clann — will be a key hurdle to overcome. On that occasion they suffered a traumatic evening in Ballyforan, losing out by 10-14 to 0-6.

A repeat of that scoreline is not going to happen here as several of these Oran players have made huge strides in recent years — but not so much that they can be fancied to win this final.