Pride of Place award for Athleague 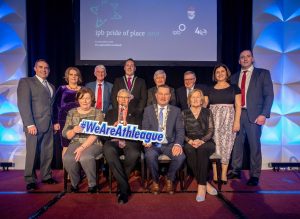 There was success for Athleague in this year’s Irish Public Bodies (IPB) Pride of Place Awards, which took place in the Lyrath Hotel, Kilkenny on Saturday night.

The village won the overall award in the population group up to three hundred people and was presented with the award at a special reception.

Michael Hourigan of the Athleague 2020 Group, the umbrella organisation representing community groups, explained that the locality was delighted with the success, which he said, would further showcase what the village has to offer in the future.

“We have a great community spirit here and local residents deserve a lot of credit. We need to piggyback on this success and further promote the village. We intend to put up signage highlighting our success and capitalise on our local Town and Village renewal scheme.

“We are currently refurbishing the local Community Centre. The upgrade is costing €355,000 and we are looking at further developing our local community spaces,” said Michael, who is a native of Cork and works with Mimar Media.