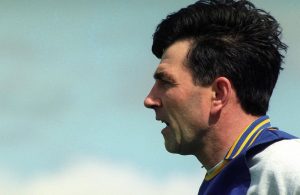 Dermot Earley’s death at the start of the decade cast a shadow over the county. By the end of the decade, however, teams and individuals had honoured his legacy. Picture: INPHO/Billy Stickland

There’s little doubt that the untimely passing of former Roscommon senior footballer and All-Star Dermot Earley on June 23rd, 2010, rocked his beloved county to its core.

A new decade had just dawned. Understandably, hope and giddy excitement in anticipation of what the next ten years might bring on the sporting front was plentiful. Yet, the sudden death of the former Chief of Staff of the Defence Forces cast a dark cloud over County Roscommon and beyond.

For Roscommon GAA fans, Earley was their hero — the player in “Primrose and Blue” they looked up to for inspiration when there was a hint that the tide may be turning against their team.

His brother, Paul, best summed up the standing of his late brother when, speaking at the Roscommon Herald/SuperValu Sportstar of the Year awards banquet in 2011, said: “To a lot of people, Dermot was their hero, and he was mine as well.”

How ironic then that, just as Dermot would have wished, Roscommon has gone on to enjoy the most successful ten years in its proud sporting history. Barriers have come tumbling down. Individuals and teams have more than held their own on the national stage.

At international level, competitors like Jack Carty, Aoife O’Rourke and Heather Payne have put us on a map where we’re proud to say “they’re one of us”.

Let’s blow our own trumpet for a moment — the Rossies have taken the sporting world by storm.

The image of Donie Shine landing an injury-time free to procure a one-point victory against Sligo in 2010 was steeped in tales from the unexpected.

However, what transpired later in the decade stemmed from reversing an unproductive record at underage level to proliferate four U-21, two minor and one U-17 crowns at provincial level.

To hear national commentators commend our ability to punch above our weight and to mix it with the big boys, given our resources and population, shows that anything is possible. On the cusp of the next decade, breaking the All-Ireland semi-final glass ceiling must be the priority.

And yet while we’re often consumed by the exploits of our senior footballers, and that’s understandable given how they can unite the county — north and south, east and west — what has defined this decade is how sport has spread its wings.

Think of David Concannon in his pomp on the world darts circuit. Remember Fiona Tully being the best in the world in the handball alley? The tightly-knit hurling community holding its own and bagging some national silverware at adult and underage level along the way.

St. Brigid’s dominance of the local and provincial club football championships before they conquered all of Ireland, thanks to Frankie Dolan’s dramatic winner against Ballymun Kickhams.

The emergence of rugby, most notably in Roscommon CBS, highlighting how the gospel according to the oval ball has spread around the county, fuelled by the exploits of local heroes Denis Buckley and Jack Carty.

Boyle Celtic reaching the last four of the FAI Junior Cup. The Community Games movement continuing to prosper and reaching out into every corner of the county, despite the increasing difficulty in recruiting new volunteers.

Pick up the Roscommon Herald’s Christmas publication #WeAreRos to read more! In your shops now.