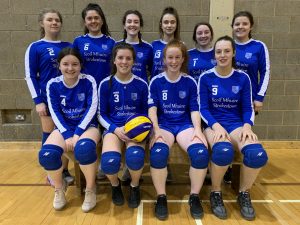 The Scoil Mhuire, Strokestown, senior volleyball squad that will contest Thursday’s All-Ireland B final in UCD.

Having won the C title two years ago, the Scoil Mhuire, Strokestown, senior girls’ volleyball team will meet Patrician Presentation, Fethard, in this year’s B decider in UCD at 11 a.m..

Three of the girls that were on the team that made history in 2017 — Sarah McVeigh (Player of the Match in the final two years ago), Ciara Fahey and Aoife Beirne — are part of Martina Finneran’s side that are hoping to build on the great strides the East Roscommon school has made in the sport in such a relatively short space of time.

“It has been two years since we wrote our names into the history books as the first Shannonside school to win a senior girls’ volleyball title. Now we’ve a chance to add to our story by taking home another All-Ireland title, this time at a division higher. We’re really looking forward to it,” Martina Finneran told the Herald.

The second round of matches saw Scoil Mhuire return to a more local environment as they defeated Ardscoil Mhuire, Ballinasloe, following two closely contested sets at AIT. But they found neighbours Roscommon Community College a far more difficult prospect. They conceded the first set and were fortunate to come out the right side of a 2-1 victory.

The final game against Thursday’s opponents Patrician Presentation of Fethard in Tipperary town determined who topped the group. A below par Scoil Mhuire soon found out that the Munster side weren’t to be underestimated and the Fethard school were well deserving of their 2-0 victory.

St. Leo’s of Carlow provided the opposition in the semi-final.

“We lost the first set 24-26.  We seemed to be on the wrong side of any luck, but we felt if we could keep the scoreboard moving and control our side of the court that we could make up the deficit in the second set,” recalled Martina.

That’s exactly what happened as Scoil Mhuire prevailed 25-21 before the girls demonstrated their metal resolve to win the third set 25-17, despite losing the lead on two occasions.

Now comes the ultimate litmus test. Can Scoil Mhuire overturn their group game loss against Patrician Presentation, Fethard, on the day that matters.

ELPHIN BACK IN THE LIMELIGHT

A barren period has manifested itself on the national front since then but that’s about to change with the senior girls’ team contesting Thursday’s C final against St. Leo’s from Carlow in UCD at 12.30 p.m..

It is the first time a senior girls’ team from the school has reached the decider, something that excites team coach Kyra Wildy.

“This particular team have been together for a couple of years. They work together as a team, they support each other and they offer encouragement to one another. They never lose heart. Their focus is always on the next point,” she revealed.

Victories against Scoil Chriost Ri, Portlaoise, and Our Lady’s College, Galway set up a semi-final meeting against a fancied Grange Community College from Dublin.

“Our goal has always been to win the next match. Getting to a semi-final was a big deal, and when we won it, there was great excitement.

“Now there’s huge anticipation in the school. Everyone has rowed in behind us. Volleyball is a popular sport in the school anyway, so it’s great for the younger students to see the senior team do well,” continued Kyra.

With the school’s Cadette girls’ team in quarter-final action on Tuesday and the Second Year team in action after Christmas, alongside side the senior boys’ team in A Shield semi-final action this week, these are heady days on the volleyball court for Elphin Community College.

A first senior girls’ All-Ireland title would be the icing on the cake.

There will also be a big North Roscommon interest in the Senior A boys’ final as last year’s beaten finalists, Drumshanbo Vocational School, face St. Flannan’s College, Clare, in UCD at 12 noon.

Coached by Aidan Shannon, Drumshanbo, who have students from Drumboylan, Keadue and Arigna and Ballyfarnon in their ranks, defeated reigning champions St. Brigid’s, Loughrea, 26-24, 30-28, 25-19.

On Thursday, they will face a team with four Irish internationals on a 16-game unbeaten run.

Captain of the Ireland U-18 team, Gareth Gilmartin, is one of the Leitrim school’s main players. Emmett Moran and Barry McWeeney, who have been dividing their time between their volleyball and football commitments, will also be vital to Drumshanbo’s cause.