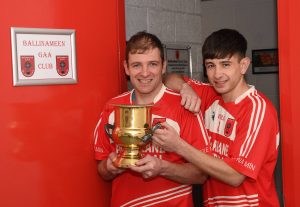 Father and son, David Wynne Snr. and Jnr., who won a Junior A Football Championship title with Ballinameen.

Father and son relationships tend to be special. But, in a GAA context, the archetypal imagine is one of Dad on a sideline, or behind the wire, dishing out orders to “Junior” when he does something right, or lets possession slip through his fingers.

But the Wynne family from Ballinameen have taken interaction on a GAA field to a new level, by simply being on it at the same time.

The North Roscommon club’s Junior A championship triumph was greeted with great excitement and fanfare around places like Breedogue and Kingsland in October. Imagine then the emotion for David Wynne Senior and Junior who started the thoroughly deserved 2-11 to 0-11 victory against St Brigid’s.

“It took a couple of minutes for it to sink in. Initially there were people jumping around the place but eventually I had the family around me. It was quite emotional,” recalled David Snr. Describing his son as “a great bit of stuff”, David Snr remembers driving David Jnr and Shane O’Neill to training and matches with various Roscommon underage development squads.

Now, here he was sharing the same pitch as them on one of Ballinameen’s greatest days. “We played Elphin in a charity match last Christmas. It was the first time myself and David played together and, at the time, I vowed it would be the last.

“I had intended to play with the Junior Bs this year. I didn’t feel that the body would be able to give the commitment,” outlined the 38-year-old who works in Tool & Gauge, a tool manufacturing company based in Tubbercurry, Co Sligo.

Things got off to a ropey start for Ballinameen as a combination of different factors meant that the season was a “slow burner”.

“Charlie [Ward] had been on to me to stick at it. Then we played Kilglass in a match and we just had the bare 15. I felt that I needed to help them out because it was going to be a long year. I suppose I never looked back from there,” he revealed.

As the season progressed, more young players were introduced to the team, including David Jnr. “I think the first competitive game we played together was against Shannon Gaels.

“I think David said ‘pass the ball Dad’. He got a couple of strange looks. So we decided that we’d just call each other David from that point on.

“Of course there’s a fair bit of slagging. He’d be wondering why I didn’t give him the ball and I’d have to tell him that the eyesight isn’t as good as it used to be. Then you have all the Ballinameen lads saying that I only pass it to him. Sure you can’t win,” he laughed.

David Snr started his playing career with Curry in Co Sligo at U-14 level, having lived in England for five years. “We won everything all the way up. I was playing with lads like Seán Davey and Paul Durcan who went on to have great career with Sligo. But, when I was 18, I popped my shoulder and that kept me out of the game for six or seven years. It kept popping out, so I eventually needed an operation.”

With his wife Diane, a native of Achill Island, working in MBNA in Carrick-on-Shannon, the decision was made to purchase a house in Ballinameen. They have three children — David, 18, Ryan, 8, and Katie, 10 months.

David was part of the Ballinameen team that captured Junior A championship honours in 2010. Four years later, his father Frank was a selector on the team, and David got the chance to play with his brothers Richie and Robbie.

In 2015, David, Richie and Robbie transferred back to Curry where they helped them reach the final, only to be beaten by St. Mary’s.

“We made a pact that we’d go back to Curry for one year — just to test ourselves. I would always be very self-critical whereas in Ballinameen they’d always give you great encouragement,” he pointed out.

Beaten in the 2018 semi-final, Ballinameen targeted championship honours this season but it was only when the championship kicked off that the men and red and white jerseys took flight.