Elphin savour success on the double 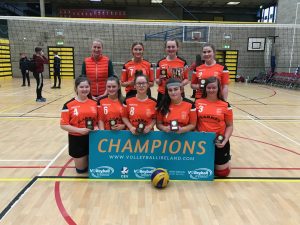 The Elphin school prevailed 25-21, 25-8 against St. Leo’s, Carlow, in the C championship final at UCD, ensuring that the school’s first appearance in a senior girls’ decider ended triumphantly.

“It was more comfortable than we thought it would be beforehand. But the girls were magnificent. They played as a team, and everyone did their job to perfection,” Kyra told the Herald on Monday.

Emily Keane and Ellen Tiernan, who scooped the MVP award, excelled at blocking, while the setting of Rachel Gormley and Alanagh Loftus were also central to their side’s success. Rachel Muldowney returned a ball with interest at a vital point of the opening set, finding space in the opposite corner for a crucial score, while Lucy Fallon did the spadework for Gormley and Loftus in terms of setting.

Chloe Higgins set up some great scores, while Chloe O’Dowd’s defence was pivotal as Elphin Community College closed in on All-Ireland honours in the second set.

“To the girls’ credit, even though it was their first senior final, they were in control for the most part. But they deserve it because they have been so dedicated. They’ve always backed up each other and it’s great to see them get their just rewards.

Meanwhile, the Elphin senior boys won the A shield title in the University of Limerick against Dungarvan Community College on Tuesday, having beaten Davis College, Cork, 25-19, 20-25, 25-16 in the semi-final earlier in the day.

Elphin had secured a tough 2-1 win against Davis College in an earlier round but were very aware that this was going to be another tense match.

Elphin began brightly, with Colin Burke and Alex Rossiter hitting deep into the Cork outfit’s court. Gormley was also setting well for both Hugh Molloy and Rossiter. Elphin’s early lead was short-lived, however, as Davis College brought the sides level again at 12-12 due to a number of unforced errors.

The second set wasn’t as fluid as a number of serving errors left Elphin trailing 8-4.  This early setback allowed Davis College to establish a clear lead. Despite some well-taken scores by the clever play of Colin Burke and Molloy, Elphin never gained the upper hand, losing the second set 25-20.

Paul Molloy and Daniel Toop were introduced off the bench for an intriguing 25-point third set. Elphin’s serving was much improved with Burke, Main and Rossiter finding their range, creating a good attacking platform.

Elphin weren’t going to let this opportunity slip and ran out 25-16 winners.

Elphin opened up a three-point lead at 12-9. Then they took control with Burke’s setting and clever second touches catching Dungarvan off guard.

Liam Kearns was re-introduced to settle the side and he covered exceptionally well, saving several points with his positional awareness.

Daniel Toop’s unorthodox style of serving also caused panic in the Waterford side as Main and Rossiter scored set-winning scores to win the first 25-22.

The second set started well for Elphin as they opened up a five-point lead. Kearns and Toop landed a number of points with deep serves, while Rossiter, at the net, was blocking and hitting winning scores.

Dungarvan responded to leave three points between the teams but Elphin hit back to leave the score at 23-19. Elphin introduced Ciarán Ryan and while Dungarvan responded, Elphin remained calm. Hugh Molloy, who had an outstanding game, had the honour of winning the final point with a precise play, leaving Dungarvan scrambling to retrieve but to no avail.

Elphin had captured their first crown in eight years. Colin Burke was awarded a very deserved MVP award, while Alex Rossiter lifted the Senior A Shield trophy on behalf of his team-mates and the school.