Much achieved on and off the field 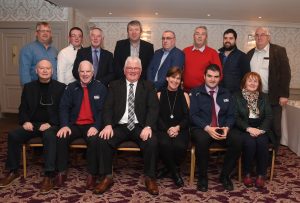 Roscommon GAA Chairperson Seamus Sweeney had the honour of confirming that 2019 was a year in which “there was much achieved both on and off the field of play” when he addressed delegates at last Wednesday night’s county convention in the Abbey Hotel. It was no surprise that while he was effusive in his praise of many of the county’s teams, it was the Club Rossie team that earned top billing in the Shannon Gaels man’s address.

“To start the year with the boost of almost a million euro is the sort of event that officers of county board officers dream of, but rarely experience,” he told delegates.

“In my address to last year’s convention I said that the success of the Win A House In Dublin will be a game changer and I genuinely hoped it would. Little did I know it would be such an outstanding success.

“To be in a position to clear our debts and consolidate our finances in little over a year is a remarkable turnaround. This did not happen by accident. It came about as a result of perfect planning and brilliant delivery by the most dedicated and professional committee I have ever encountered.

“I would like to say to the Club Rossie team we are grateful for all your work and on behalf of all of us, thank you,” he stated.

Mr Sweeney went to highlight the successes of the senior and U-17 hurlers, as well as Anthony Cunningham’s senior football panel, who secured the Connacht championship after two memorable away days in Castlebar and Salthill.

“Days like we had this year in MacHale Park and Pearse Stadium make it all worthwhile. Winning the FBD League and the Nestor Cup was a great achievement and I want to congratulate everyone associated with these triumphs.

“Congratulations to Padraig Pearses who won their very first senior championship final and made it to the Connacht final. Well done also to Four Roads who regained the Mickey Cunniffe Cup and congratulations to all clubs who won county titles in 2019,” he continued.

Looking forward, the chairman spoke of the review and the process that led to the appointment of David Mannix as a full-time strength and conditioning coach in the county, while he also revisited the topic of rural depopulation alongside the survey on demographics that is being undertaken by the GAA as a whole, with Roscommon as one of four pilot counties.

“Last year I spoke about the threat to the future of some of our clubs and the need for balanced regional development and employment opportunities for our young. The GAA at headquarters level have set up a pilot study to measure demographic change and Roscommon is included with Kerry, Tyrone and Westmeath. I welcome this initiative, which should provide proof — if proof is needed — of the stark future for some of our clubs,” he warned.

“Something tangible must come out of this and policy must change to assist economically the less developed parts of our country, so that clubs in these areas have a future,” he concluded.