A new €10,000 annual third-level scholarship for second-level students in the county was unveiled at a special reception in Scoil Mhuire, Strokestown. 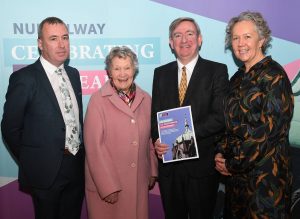 The new Leaving Certificate Scholarship is named after Pauline and the late Bunnie Jones of Tulsk, and will see four Leaving Cert students, two of whom will be from Strokestown, avail of a scholarship fund of €10,000 annually.

The scholarship will be awarded to students who demonstrate academic excellence in their Leaving Certificate and progress to undergraduate studies at NUI Galway.

The scholarship will be based on those students who receive the highest Leaving Cert scores in any one year.

The principal of Scoil Mhuire, Strokestown, Eamonn Corrigan described the initiative as “a wonderful gift to the young people of Roscommon”. The president of NUI Galway, Ciarán Ó hÓgartaigh said that the scholarship was “a transformational gift in the support of students from second-level schools in the county”. Representatives of the Jones family also attended the official ceremony.

Want to appear on The Toy Show? Now’s your chance