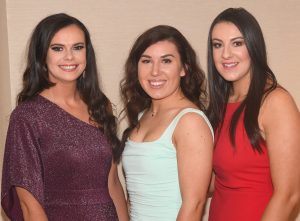 Successful Roscommon teams in 2019, honoured at a presentation banquet in the Hodson Bay Hotel, Athlone, on Sunday evening, were encouraged to go “one or two steps further” in 2020.

The event, sponsored by the Hodson Bay Hotel and organised by a committee led by Roscommon GAA Vice-Chairperson Brian Carroll, heard speakers recall the great pride Roscommon people, at home and abroad, derived from the exploits of all three teams who were encouraged to push the boat out even further next year.

Special guest Harry Keegan felt that the successes were a “stepping stone” towards greater things, recalling that all three teams had shown “a lot of grit”, something Roscommon supporters were delighted to see.

“We, as a county, feel great pride watching our teams playing and fulfilling their destiny,” stated Keegan.

Liam McDonagh felt that seeing the “extended GAA family” coming together to celebrate their achievements was indicative of the progress Roscommon was making in all codes.

“It isn’t by chance that this has happened. From a ladies’ football perspective, I’ve seen the great work that has taken place at underage level in the county. No doubt the intermediate team will soon make the breakthrough and contest an All-Ireland final in Croke Park,” he noted.

Hurling Board Chairperson Christy McDermott, in congratulating the senior hurlers, felt that it was imperative that players had the best facilities available to aid improvement over the coming years.

“We need the Dermot Earley Centre of Excellence to get us up to speed in terms of where we need to be. Ciarán (Comerford) is trying to get us up to speed where we feel we should be. There was real progress made in 2019 and no doubt our hurlers will show the same ability, determination and commitment to push it on,” he remarked.

Roscommon senior football manager Anthony Cunningham dedicated the memorable victories in Castlebar and Salthill last summer to “the supporters” and he encouraged his “honest and humble” players to “drive things on” in 2020.

“We would hope that there’s more in the tank. We’ve made a plea to the players to take this chance because it might not come around again. Everything we’re doing is for the team and to make them better. We want more success alongside seeing our players develop,” he explained before paying tribute to outgoing members of his backroom team, physios Aisling Creighton and Conor McGowan. He also welcomed David Mannix and Gareth Wright on board for 2020.

Roscommon Ladies’ Board Chairperson Brendan Cregg felt that the achievements of all three teams had put Roscommon “up there with the best in the land.” He added that a sense of togetherness and camaraderie made the county unique when it came to competing at provincial and national level.

“We operate as a family. We always stand together and give it our best shot,” he highlighted.

Roscommon County Board Chairperson Seamus Sweeney paid tribute to sponsors Seán Mulryan and Tom Hunt before stating that the board was committed to delivering the upgrade of Dr. Hyde Park and the Dermot Earley Centre of Excellence.

“We are the fifth smallest county in the country and we must continue to work together. We’re in a good place and I’d like to pay tribute to the volunteers who work so hard to progress Roscommon GAA,” he said.

David Leydon and Pat Compton of Club Rossie spoke about their aspirations for the Win a Home in London fundraiser, revealing that the initiative had raised €309,100 by Sunday evening, including €47,000 alone on Christmas Day.

They urged Roscommon players in all codes to promote the draw through their social media channels, adding that funds raised from the “ambitious” project would benefit “this generation and future generations” to come.

“To our players I say this — you have carried our dreams. It is a heavy burden and sometimes we can be very demanding. But we want the best for our people. Collectively, we can strive to dream and achieve,” said Mr Compton.

The MC for the evening was John Lynch.