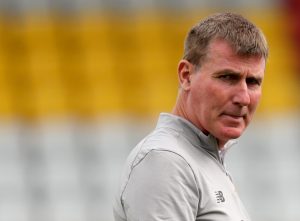 Incoming Republic of Ireland manager Stephen Kenny will be the special guest for the 2019 Roscommon Herald/SuperValu Sportstar of the Year awards banquet in the Abbey Hotel. Picture: INPHO/Oisin Keniry

Republic of Ireland U-21 manager Stephen Kenny will be the special guest at the 2019 Roscommon Herald/SuperValu Sportstar of the Year awards banquet in the Abbey Hotel, Roscommon town, on Friday, January 17th.

Indeed, it was at Dundalk where he became renowned as one of Ireland’s most successful managers, leading the Louth club to eight major trophies and exposure to extensive experience in European competition, including the group stages of the Europa League.

His appointment as Republic of Ireland U-21 manager has seen a dramatic upturn in the team’s fortunes where he has overseen the development of players like Aaron Connolly, Troy Parrot and Michael Obafemi.

Kenny’s charges currently lead their Euro 2021 qualifying group and are in a strong position to make the finals for the first time in the country’s history.

“We’re thrilled that Stephen has agreed to join us for our special night in the Abbey Hotel. These are testing times for Irish football but the great work being done by people like Stephen Kenny means that there is always hope that the glory days can return.

“Getting a guest of Stephen’s nature is in keeping with the Roscommon Herald and SuperValu’s commitment to giving our sportstars an event they will remember for a long time.

“Over the years, we’ve had Ken Doherty, Rob Heffernan, Eric Elwood, Kevin Kilbane, Keith Andrews, Graham Geraghty and Ray Houghton as our special guests and I have no doubt that Stephen will prove to be just as popular among our winners and their families,” said Ian Cooney, Sports Editor, Roscommon Herald.

This year’s Hall of Fame winner is Mary Clifford who has dedicated her life to the betterment of Gaelic games in the Boyle area. Mary and her family are among the most loyal and passionate supporters of their local club and native county.

The Special Achievement winners for 2019 are Roscommon Special Olympic athletes Chelsea Phillips and Hugh Naughton who represented their county and country with distinction at the World Summer Games in Abu Dhabi.

Chelsea won a gold medal in swimming and Hugh captured a silver medal for bowling in what turned out to be a spectacular Games for Team Ireland who won 86 medals overall.

Finally, the Outstanding Achievement winner is Ireland and Connacht rugby out-half Jack Carty who enjoyed a 2019 to remember, making his debut for Ireland in the Six Nations before going on to nail down a berth in Joe Schmidt’s World Cup squad for Japan.

A profile of all the winners will be published in next week’s Roscommon Herald.

*A very limited number of tickets, costing €50, are on sale for the event by contacting Roscommon Herald Sales Manager Claire Morgan on 086 2395156 or by e-mailing [email protected]