Shock as Maura Hopkins not to contest election 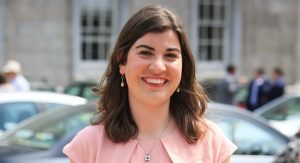 The Fine Gael party organisation in Roscommon Galway has been left reeling following confirmation this evening (Tuesday) that Senator Maura Hopkins will not contest the forthcoming General Election.

Senator Hopkins has confirmed she will not contest the election after informing Taoiseach Leo Varadkar of her decision yesterday (Monday) which was publicly confirmed earlier this evening (Tuesday).

Senator Hopkins said her decision “was not one I wanted to make” claiming it would be “too difficult to run” following the birth of her first child prior to Christmas, adding: “the timing of the election doesn’t really suit.”

It’s unclear if Senator Hopkins will bid to defend her Senate seat following the General Election, but it’s unlikely she will do so. “I still intend to remain involved in Fine Gael politics”, adding: “maybe that’s down the road” in respect of a possible return to local electoral politics in the future.

Asked if her decision not to contest the election leaves Fine Gael in a difficult position ahead of the next election, which many pundits predict may be next month, Senator Hopkins remarked “this is a matter for Fine Gael party” as to who her replacement, if any, would be.

“I’ve loved the job of representing the people of Roscommon Galway the past five years. I fully intending to contest the next election, but since the arrival of my daughter, my circumstances have changed. I considered the matter carefully over the Christmas period before coming to my decision”, Senator Hopkins remarked.

“At the present time, it would be too difficult for me to discharge my job as a Senator and mother as the job of a public representatives requires one’s full attention. I intend to support the party’s candidate, Cllr. Aishling Dolan and any other candidate the party may decide to run in the forthcoming election.

With the party served by only three Councillors in the entire constituency, the party faces a race against time if it is to add a second candidate in advance of the election, irrespective of when the election takes place.

Senator Hopkins was first elected to Roscommon County Council in May 2014, securing 840 first preferences in the Boyle electoral area with 7.30% of the vote, securing the party’s sole seat on the eighth count.

Later that year, Senator Hopkins ran in the Roscommon South Leitrim bye-election, where she finished third after securing 5,593 first preference votes or 16.8% of a first preferences share.

Later in 2016, Senator Hopkins ran in the new Roscommon Galway constituency where she came fourth in the three seat constituency, with a 14.9% first preference share or 6,812 votes before later winning a seat on the seven seat Administrative panel to Seanad Eireann, securing 117 first preferences, taking the third seat on the tenth count.