Monksland native Dara McGuinness became the latest player from that area to achieve recognition in the international soccer arena when he was selected to be part of Paul Osam’s Ireland U-16 squad for next Friday’s friendly clash in Turkey against the home nation.

McGuinness, who attends Coláiste Chiaráin, learned his craft with the local St. Joseph’s club but he had a hugely successful year with St. Patrick’s Athletic in 2019, winning both league and cup medals with the Inchicore-based club.

Playing as an all-action central midfielder, McGuinness has caught the eye of a lot of coaches over the season and was rewarded with selection for the international side.

Dara will hope to follow in the footsteps of fellow Monksland player Kyle Conway, who played over four hours of football for the Ireland U-16s in 2019 and is also part of the St. Patrick’s Athletic club. 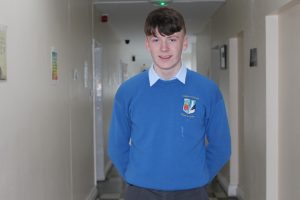 Coláiste Chiarán student Dara McGuinness who will earn his first cap for the Republic of Ireland U-16 team on Friday next.