‘There will be tougher days ahead’

Move on please — nothing to see here.

A 30-point humiliation of Leitrim wasn’t on top of Anthony Cunningham’s wish list when Roscommon rolled into Carrick-on-Shannon on Sunday. For the Roscommon manager, it’s all about getting the house in order for the visit of Laois to Dr. Hyde Park on Sunday week, a game where Roscommon will need to hit the ground running.

But 2019 has been a case of so far, so good, and Cunningham was keen to highlight that getting the job done in Carrick-on-Shannon was important in terms of being ready for the visit of the O’Moore County for the opening round of the league.

“We want to get to the final of every competition. But the important thing is that it’s work for us in preparation for the league in two weeks’ time. There will be tougher days ahead. Leitrim were missing a few players but we had to come down here and get over that challenge. We did that, and we move on.

“It’s what the pre-season competitions are for. We have a big panel and we’ll probably be cutting it before the start of the league. It’s great to get games and it’s all about sharpening your game at this time of the year,” he explained.

Galway in Dr. Hyde Park on Saturday next will provide a sterner challenge, and it will be another step down the road in getting game time into different players.

“It will be brilliant preparation to get a game like that. We want to give experience to players so we’ll sit down during the week and go through the team for the final. But the biggest match for us is Laois at home on the first day of the league.

“We need everyone fighting for a place. Obviously we’re going to get knocks and the mileage on the legs at this time of the year can take its toll. It’s great to see these guys come on. Cathal (Cregg), in particular, looked sharp when he was introduced. We’re delighted to have Colm Lavin back in goal and he did very well. We have a number of goalkeepers now, so it’s all systems go,” he concluded. 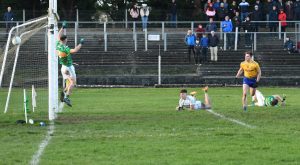