Shortly after 12.30 a.m. last Friday night, Castlerea boxer Aoife O’Rourke was named as the Overall Roscommon Herald/SuperValu Sportstar of the Year for the second time in a row, just a matter of hours before she and 16 other Irish boxers gathered at Dublin Airport before flying out to take part in the famous Strandja Multi-Nations tournament in Bulgaria.

In the 18-year history of these awards, there was never a time when the identity of the winner was so universally predicted.

Even if you walked into the ballroom of the Abbey Hotel unsure as to who would take home the big prize, any doubts would have been eradicated when the monthly awards were given out. Eighteen monthly winners were feted, featuring 11 sports, current and future stars, teams and individuals, athletes who had earned their reward on the local stage, the national arena, and even further afield.

A packed house showed their appreciation to all the winners, recognising the incredible effort and commitment that every person and every group put into their chosen discipline. Yet when Tarmon’s golden girl was called up to receive her award for the month of September, the room exploded, as people spontaneously stood up and took the volume up a notch for the European Elite Middleweight boxing champion.

In a nutshell, this was different. In their own way, the audience were sending a message on behalf of the people of Roscommon, and that message was that in a year where there were All-Ireland titles, international caps and Olympic medals earned, in a year where historic new ground was broken by several teams, Aoife O’Rourke had still won their appreciation and their affection like no-one else.

That message was reinforced at the end of the night when Republic of Ireland U-21 soccer manager and special guest Stephen Kenny officially confirmed O’Rourke as the Roscommon Herald/SuperValu Sportstar of the Year — the only person to ever win the main award on two separate occasions. Yet again the crowd noise reached new heights as she walked up to the stage.

Before O’Rourke, Katie Taylor was the only other Irish fighter to come away from the European Elite Women’s Boxing Championships with a gold medal. This is the rarefied atmosphere in which she now exists, and yet on stage she was the same quiet girl that Castlerea has grown to know and love over her 22 years growing up in the West Roscommon town.

Aoife thanked the people of the town and county for their incredible support, referring both to the reception that took place in Castlerea after she returned, and the countless messages and calls she received on the week of the championships, particularly after the final, a unanimous decision win over Poland’s Elziebta Wojcik.

“It has been amazing, the support has been truly incredible. I had no idea what I was coming home to after the championships and I really appreciate it. I’m delighted to be here, delighted to have won this award and really grateful to the Roscommon Herald and to SuperValu, and to everyone who gets behind me all through the year,” she told MC Willie Hegarty on receiving her award.

The big goal for 2020 for O’Rourke will be Olympic qualification, and she explained to the audience what’s in store as she tries to secure her place on the plane to Tokyo later in the year.

“I’m training full-time with the Irish squad now, we had a training camp in Italy recently. The Olympic qualifiers take place in London in March. The top four in that competition will qualify, and then if that doesn’t work out the World Championships are on in Paris in May.

“My focus is on London. I hope to qualify early and that way I can then concentrate on my training,” she explained.

This week’s tournament in Bulgaria will be a warm-up for the London qualification event, which gets underway on March 13th. O’Rourke’s victory last September, though perhaps even more so her victory over World and Olympic youth champion Anastasia Samonova 4-1 in the semi-final, will have her marked out as one to watch in both events, both for her own supporters and for her competitors and rivals.

Yet if the goodwill of her home community is worth anything, further success for O’Rourke in the year ahead isn’t just likely, it’s inevitable. She may be an international star on the rise, but she’s one of our own here, and last Friday night it was clear that neither she, nor the people of Roscommon, are about to forget that any time soon. 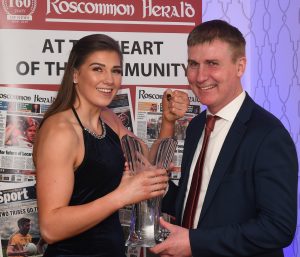