They’ve come a long, long way together, and now Michael Finneran believes that the Roscommon intermediate ladies’ team are ready to take the next logical step in their development. But there are no guarantees in sport, and the manager is acutely aware of the need to hit the ground running, starting with Sligo in Boyle on Sunday (throw-in is at 12 noon), in an effort to make a realistic push for promotion out of Division Three.

Ironically, Roscommon were foiled by Sunday’s opponents in the group stages and the semi-final of last year’s league campaign before gaining revenge to retain their provincial championship crown in Castlebar. With a home match against Laois coming down the tracks a week later, Roscommon’s form in 2020 will be laid bare very quickly.

“We’ll know soon enough where we are. It’s imperative that we get off to a good start. But we’ve shown progress every year that I’ve been here so I’d be hopeful that we’ll do well,” the former Roscommon midfielder told the Herald.

Having lost out to Meath in the last two All-Ireland semi-finals, Finneran has always stressed the need for Roscommon to be playing at a higher level. He thought long and hard about committing for another season but he believes that a blueprint has been set up in terms of the targets that ladies’ football in the county should be setting.

“I do see potential in this group and, in my mind, there’s clear pathway ahead of us that is achievable. I would like to think that we can reflect back at the end of 2020 and say that we’ve pushed the whole thing on further.

“But we’ll find out soon enough. By the time February rolls around, we’ll know exactly where we’re at. If you want to be at the business end of the championship, you have to be playing in Division Two. We’ve seen that over the years,” he insisted.

John McHugh from Strokestown has joined the management set-up as a selector, while Meave Holmes is the team physio. Gary Wynne, Shane Monaghan, Marie Kelly and Martina McHugh have remained on board from last year.

In terms of player availability, Siobhan Tully, Alice Kelly, Amanda McLoone and Katie Daly won’t be involved in 2020. Natalie McHugh and Joanne Cregg are unavailable for the first half of the season at least owing to injury and exams respectively.

But there’s plenty to work with from two minor teams that have reached successive All-Ireland finals in 2018 and 2019. Aimee O’Connor and Megan Kelly were involved last year, and they will now be joined by Aoife Gavin (St. Dominic’s), Sarah Scally and Ellen Irwin (St. Faithleach’s) and Sarah McVeigh (St. Barry’s) who will inject plenty of enthusiasm and energy into the group.

However, it’s the return of former All-Ireland junior medal winner from 2001, Caroline Conway, which will catch most people’s attention. Now in her mid-thirties, Conway has been out of the intercounty game for the best part of a decade, partly because of a serious back injury, but her experience will be pivotal in a panel where the age profile has dropped significantly in the space of 12 months.

“We’ve plenty to work with but you’d be hoping that three or four girls in the 18 to 19-year-old bracket will now become established in the team.

“We’re all on the same wavelength — players, management and ladies’ board. The next logical step has to be to keep climbing the ladder to the point where the end game is senior championship football for Roscommon. That’s what we all want,” he concluded.

In the short-term, a good start will be half the battle. For Roscommon to harbour ambitions of promotion, where the safety net of semi-finals has been removed, victory against Sligo is the only currency in a league where Sunday’s opponents, Laois and Kildare are expected to be in the shake-up for honours.

With Kildare at home, away games against Fermanagh, Down, Wicklow and Longford offer a realistic chance for Roscommon to be in the top two after the final round of games. 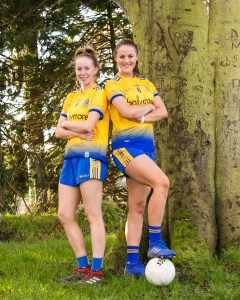