A new era of democracy and people power was ushered in last Friday night at the Roscommon Herald/SuperValu Sportstar of the Year awards, and it was the Roscommon U-16 camogie panel who proved to be the people’s choice as Team of the Year.

This was the first time in the 18-year history of these awards that a public vote was used to determine the winner of one of the categories and the group of girls that secured All-Ireland glory at Kerry’s expense last September — the first in the county’s history at U-16 level — were chosen to take the accolade.

The foundations of the Abbey Hotel ballroom had barely recovered from the roar that greeted the group as they went up to collect their monthly award, secured following their 2-10 to 1-8 win over the Kingdom girls at Sixmilebridge. When they were announced as Team of the Year, the Richter Scale was again the most suitable method of measuring the reverberations that shook around the room.

Joint captains Orla Connolly and Niamh Fitzgerald spoke to MC Willie Hegarty, with Orla acknowledging “we’re so grateful to everyone for voting, and to everyone involved in these awards”.  Niamh referred to how the year was “surreal”.

“It has just been unbelievable, to go unbeaten all year is unbelievable, and even in the final to go in six points down and win by five was an amazing way to do it,” she told the audience.

Goals from Ciara Kilcommons and Anna Campbell turned the tables and ensured that Roscommon would be crowned champions after a number of near misses over the years.

Mary Grehan, a member of the management team, hinted at another big year in 2020 when she reflected on the side’s popular award.

“We’ve been three years together working on this, it’s just a very special group,” she revealed.

“At the start of the year we predicted we’d be here, and the future is certainly very bright for these players and for Roscommon camogie. They’re an ambitious panel who now know what it’s like to win. Many of them are underage again next year, and there’s no reason they can’t keep winning and keep getting more medals and more success,” she predicted.

The 2020 All-Ireland C championship will get underway in July, and Roscommon have been drawn into a group containing Kerry, Tyrone and championship favourites Westmeath, with Armagh, Down and Mayo on the other side of the draw. 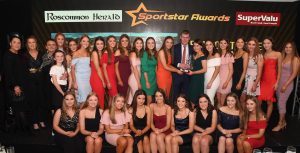 The Roscommon U-16 camogie panel and management are confirmed as the Roscommon Herald/SuperValu Team of the Year at Friday night’s sportstat banquet. Picture: Gerard O’Loughlin