Roscommon Golf Club member Simon Walker was crowned the Roscommon Herald/SuperValu Junior Sportstar of the Year winner in the Abbey Hotel, in recognition of an incredible year for the Roscommon CBS student.

Last July, Walker won the Leinster Boys Amateur Open Championship following a superb back nine on the final day in Waterford Golf Club, with birdies on 10, 11 and 12 followed by six straight pars securing him the honours.

He followed in the footsteps of famous names like Pádraig Harrington, Des Smyth and Open champion Shane Lowry by getting his name inscribed on the prestigious trophy. But as he spoke on stage at the awards ceremony in the Abbey Hotel, it was clear that being part of the Roscommon Golf Club U-18 team that won the Fred Daly trophy was probably a bigger source of satisfaction to the young athlete.

“That was a magnificent team success, something that’s been coming for three years,” he told MC Willie Hegarty.

“It was the first time for the club to win it in 43 years, there was huge support up in Castle Dargan and the roar that came up when Fionn (Hoare) sunk the winning put was the loudest I’ve ever known.

“It’s a great club to be part of, the support you get is incredible. Mike Connaughton arranges everything that’s needed, the people around can’t do enough for you, and I’d have to thank my Mam and Dad, who have spent a lot of time and money driving me around the place and giving me every chance to compete,” he explained.

Walker will also compete for Roscommon CBS this year, in what could me a momentous sporting year for the famous academic institution in the county town.

“There’s a great sporting environment in the school,” he noted.

“We’ve brought the golf into it now — that’s three Connacht titles in a row and hopefully we’ll make it a second All-Ireland this year.

Walker also delved into his sporting background, how he used to play Gaelic football and other sports. But he insisted that his greatest love was the sport of golf and he revealed that he’s happy to put his focus in that direction now, with a view to achieving further success for his club and school over the coming years and months. 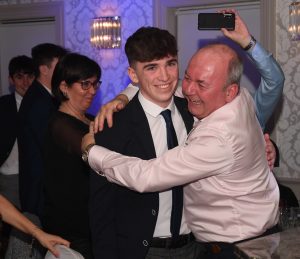 Simon Walker is congratulated by Michael Connaughton after winning the Roscommon Herald/SuperValu Junior Sportstar of the Year for 2019. Picture: Gerard O’Loughlin