Roscommon senior hurling manager Ciarán Comerford was relatively satisfied with his side’s start to life in Division 2B of the National Hurling League following the Rossies’ 2-19 to 1-10 victory against Warwickshire at Dr. Hyde Park on Saturday afternoon.

First-half goals from the impressive Mickey Joe Egan, who scored 1-7 from play over the 70 minutes, and Cillian Egan gave last year’s Division 3A champions a significant headstart as they sailed into a 2-10 to 0-6 interval lead.

Roscommon could even afford the luxury of a missed Padraig Kelly penalty as Warwickshire, who were reduced to 14 players following the dismissal of half-time substitute Tom Kelly, finally gained some traction and were rewarded with a goal from full-forward Luke Hand with 11 minutes remaining.

But Roscommon had disappeared over the horizon as attention turned to the more difficult task of locking horns with Down in Ballycran next weekend.

“Warwickshire is the unknown. You don’t know what kind of a squad they’re going to bring over. But we could only focus on ourselves and I thought we did that quite well for two-thirds of the game. I suppose the performance levels dropped when we got so far ahead. We won by 12 points. Am I entirely happy? No, but I’m delighted with the win and the two points.

“We were well on our way at half time with a bit of a breeze in our favour for the second half. Still, we left a lot of scores behind us out there. But it’s a work in progress and those scores might have been more important in other games,” explained Comerford.

The Roscommon manager went on to laud the input of Man of the Match Mickey Joe Egan, before switching his focus to matters up north on Sunday next.

“What Mickey brings into the dressing room is his confidence and his enthusiasm. It’s infectious. I’m delighted for him. He puts in the hard work and today he got the rewards.

“We want to perform as well as we can, and see where that brings us. We want to stop this yo-yo effect, to prove that we belong in this division. We’ve jumped the first hurdle but there are bigger tests ahead, starting next weekend against Down in Ballycran.

“Down will be very organised. We’ll have Cathal Dolan back, which will help. We’ll have a good week, plan for it and see where it takes us,” he concluded. 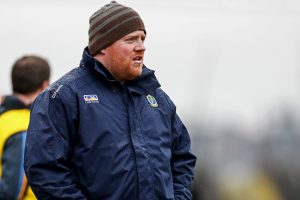 Roscommon senior hurling manager Ciarán Comerford saw his side start Division 2B of the NHL with a comfortable 12-point victory against Warwickshire at Dr. Hyde Park on Saturday afternoon. Picture: INPHO/Laszlo Geczo