O’Rourke settles for bronze in Bulgaria

Aoife O’Rourke’s education on the road to what will hopefully be qualification for the Olympic Games in Tokyo later this year continued when she picked up a bronze medal at the prestigious Strandja multi-nations tournament in Bulgaria.

The Castlerea boxer, who competed in the 75kg category, lost out to American Naomi Graham on Friday, having defeated F. Figueiredo from Brasil and L. Holgersson from Sweden earlier in the week.

O’Rourke’s attention now turns to the Olympic qualifiers in London in March where a place in the last four will secure her place on the Ireland team for Tokyo. 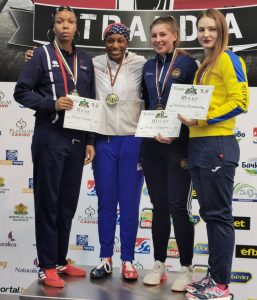 Aoife O’Rourke (second from right) with her bronze medal from the Strandja tournament in Bulgaria.