Roscommon senior football manager Anthony Cunningham sought to put a positive spin on Sunday’s dramatic 2-14 draw against Laois in the opening round of the Division Two League at Dr. Hyde Park.

The hosts blew a six-point lead entering injury time as goals from Man of the Match Evan O’Carroll and Kieran Lillis rescued an unlikely draw for the O’Moore County after Enda Smith’s 62nd minute penalty had seemingly put the hosts in the box seat for victory. But Cunningham felt that his side had done a lot of good thing during the game and hoped that the players would learn from the concession of those two late goals.

“We did a lot right and played well in parts of the second half, and that’s what we’ll take from today. We’ll need to tidy up and not concede goals like we did, and play better than we did in the first half.

Roscommon travel to Brewster Park, Enniskillen, on Sunday next where, realistically, they need a win to mount a serious promotion challenge.

“We were well in control of the match, but how many times have you seen it — a goal goes in and suddenly there’s nothing in it. It’s a one-score game. That’s the game, and we’ve got to be better able to deal with that, and the boys will have to learn that lesson from today,” he reflected.

“We’d fancy our chances any day we go out, home or away, but our play would have to be a lot better than it was in the first half out there. It can’t be as start-stop,” he felt.

*Check out this week’s Roscommon Herald for match report, reaction and analysis. 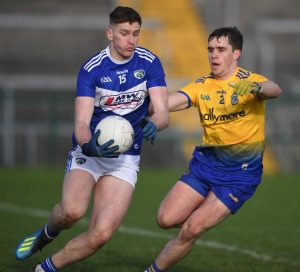