‘We must keep fighting’ – Cunningham

Roscommon had chiselled out a promising position, leading 0-9 to 0-3 at half time, but they lost their way completely in the second half, allowing Ryan Jones and Ciarán Corrigan to kick points in injury time to procure a famous 0-13 to 0-12 victory for the Ernesiders.

The afternoon was marred by a serious ankle injury to midfielder Shane Killoran who along with Ronan Daly, who suffered a spleen injury in training last week, look set to miss the remainder of the league campaign.

“I’ve just come out of a very, very disappointed dressing room. I felt that we deserved to get something out of the match but we lost our way for large parts of the second half. We steadied the ship for a while, and then lost our way again.

“We did to Fermanagh in the first half what they did to us in the second half. We just didn’t have the same patience and composure. Whether that’s mental or that we thought we might win the game easily because we were going quite well, we’ll have to work that out. We had played well against a very defensive system because they’re hard to play against. But there are no excuses in terms of going away from that.

“We probably didn’t get the rub of the green in the end. A couple of decisions went against us, but that will happen in league matches, particularly when you’re the away team,” he summarised. 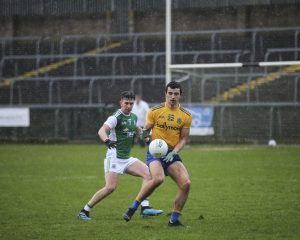