Ballaghaderreen teenager Adam McAllister added to his growing reputation on the Irish badminton scene when he reached the final of the men’s senior national championships on Sunday, only to lose out to number one seed and Olympian Nhat Nguyen.

“A great result,” is how McAllister described the competition from his perspective.

“It was my first time in a national senior final and while I didn’t perform well in the final, it was great to get there. I would have hoped to reach a semi-final before the start, but once I saw the draw, I knew that getting to the final was a real possibility,” he told the Herald on Monday.

McAllister, who studies Maths and PE in DCU, produced his best performance of the competition in the semi-final where he edged out Jack O’Brien in a roller coaster encounter that finished 14-21, 22-20, 21-17.

This marks the end of a successful first adult season for the former national underage champion, who also picked up victories in the Ulster and Connacht Premier Open competitions in the autumn and climbed up to third in the national men’s singles rankings, starting from just inside the top ten.

The St. Nathy’s graduate explained that, for the moment, he’s looking at balancing his studies with his sporting commitments.

“Training takes place twice a day at the National Centre in Marino, but as a full-time student I tend to make seven or eight sessions a week, and then do my own gym and fitness work outside of that.

“If you were looking at qualifying for the Olympics or anything like that, you’d want to be at it completely full time, but I chose to stay with part-time and to study as well. I wouldn’t be far off the professional standards, it was a difficult decision with a lot involved,” he said.

“I play with a club in Berlin and play with Leinster in the English Premier League so there are games coming up for both of those, but this tournament will definitely be the highlight of the season for me,” he concluded. 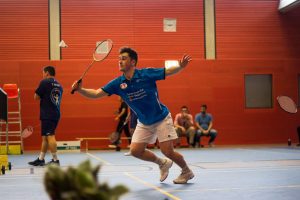