Richael Timothy took another huge step forward in the latest chapter of her varied sporting career when she picked up a bronze medal in the women’s WC3 scratch race at the Para-Cycling Track World Championships in Milton, Canada, over the weekend.

The Ballymoe woman was competing in her third World Championships, less than a year after being first called up to the Irish national squad. She also took part in the 500 metres time trial and the 3km individual pursuit races, but it was in the 10km race that she produced her best performance of the week, finishing behind Chinese rider Xiaomei Wang and the USA’s Clara Brown.

“I didn’t really expect it. I just said to myself that I was going to try to stay on as many wheels as I could,” she said.

“Coming up to the last kilometre, it felt like there was way longer to go. I just saw the American girl go so I said, ‘I’ll just give it everything to try to follow her.’ Nobody came around me, so that was brilliant,” she continued.

Timothy is continuing her preparations in the hope of being selected on the Irish team for the Tokyo Paralympics and she feels that the progress she has made through the last year, shattering personal best times repeatedly, suggests that she’s on the right track.

“Last year I got pulled in…I got lapped three or four times, I think. So now, this year, to see that I am beating the girls who were so far ahead of me last year is really good.”

In addition to being a stand-alone medal event, the scratch race also represented the fourth round in the women’s C3 Omnium discipline. Timothy finished fifth overall in that category, while elsewhere at the championships there were silver medals for Irish team members Katie George Dunlevy and Eve McCrystal, while Athenry’s Ronan Grimes also earned a bronze medal in his event — the C4 pursuit. 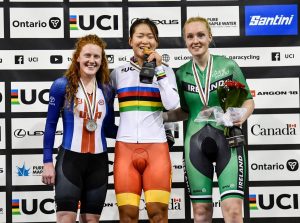