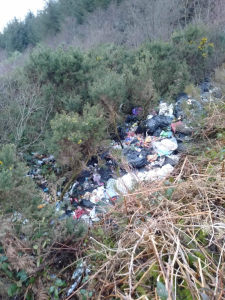 Rubbish including a child’s bicycle, rotten meat, and animal bones have been illegally dumped in the Ballaghaderreen area.

Local man Shane Cogan told the Roscommon Herald that he was shocked to see bags of rubbish dumped in the area and started an online campaign to highlight the issue. He received a great response on Twitter from other people concerned about dumping in an area north west of the town.

“All along the bog road at Coolaghtane, it’s illegal dump after illegal dump.” He has sought a response from the General Election candidates on solutions to fly-tipping, and the responses have been a “mixed”, he said.

Having returned to the town after working abroad as a humanitarian aid worker for more than twenty years, he said that the site, which is just outside Ballaghaderreen, is being repeatedly used by fly-tippers. They are even flouting signage put up by the council which warns that illegal dumpers could receive up to €3,000 fine.

“There are fresh bags there. In the area, someone had dumped a load of rotten meat and that’s very near water,” he said, adding that this could contaminate water supplies. “It’s been there for a couple of months.” There is also rubbish such as cans and beer bottles and he is mystified as to why these were dumped illegally when they could have been brought to a bring bank.

“It’s baffling, to be honest,” he said. “And it seems to be getting worse. It’s not just in Ballaghaderreen, it seems to be all over the county and country.” Mr Cogan felt that the fines for illegal dumping were too low and suggested “naming and shaming” offenders in newspapers.

“Obviously it is hard to catch people in the act,” he said, “but it’s a very important issue”.

The council was contacted for comment but no response was received before going to print. At previous meetings of the council, councillors said that littering and illegal dumping was costing the county more than €400,000 a year.