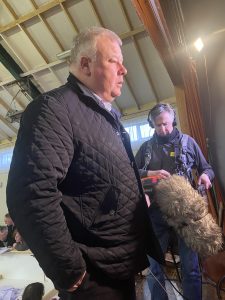 Earliest indications at the Roscommon Galway count suggest outgoing Independent Deputy Michael Fitzmaurice will top the top and be elected on the first count.

After eight boxes, the combined Independent vote is 47.50% with Fitzmaurice accounting for 1589 of that vote with fellow sitting Independent Denis Naughten on 732.

The final seat in this constituency looks set to be a battle royal between sitting Fianna Fail Deputy Eugene Murphy, his running mate Cllr. Orla Leyden, daughter of Senator Terry Leyden and Sinn Fein’s Claire Kerrane, whose vote reflects the surge in her party’s support nationally.

Fine Gael’s solitary candidate Aisling Dolan is on 353 vote representing 7.21% of the eight boxes tallied. At this stage, it would appear the party will not be winning a seat as was the case in the 2016 election.

The Green Party’s Julie O’Donoghue is on 121 votes. The electorate in the Roscommon Galway constituency is 69,598 with an estimated turnout of 66%. Early indications suggest a first count declaration at tea time this evening.