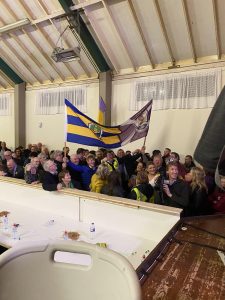 As expected Independent Deputy Michael Fitzmaurice became the first candidate to be elected in the Roscommon Galway constituency shortly after 7.15 this evening on an evening of high drama at the Dr. Hyde Centre in Roscommon.

For the first time since the 1920’s, it’s expected there will be no Fianna Fail or Fine Gael representation in this constituency with fellow Independent Deputy and former Minister Denis Naughten expected to take the second seat.

Fitzmaurice increased his vote by 7.33% on his debut General Election performance in 2016 to exceed the quota on the first count. His surplus of 1,673 votes is currently being distributed to the remaining candidates with a second count expected within the hour.

First elected in the Roscommon South Leitrim bye-election of 2014, Fitzmaurice has been an assiduous constituency worker and is sure to be targeted as one of the Independents helping to form a new government.

Kerrane looks set to emulate Count George Noble Plunkett who took a seat for Sinn Fein in the 1917 North Roscommon bye-election. In the process she looks set to become only the second woman to represent Roscommon in Dail Eireann and the first since 1981.