Rossies back in the mix with victory against Clare

Anthony Cunningham praised his side for sticking to the pre-match gameplan as Roscommon got their Division Two League campaign back on track with a comfortable 1-8 to 0-4 victory against Clare in tricky conditions at Dr. Hyde Park.

Roscommon kept Clare scoreless for 45 minutes, establishing a six-point lead at the interval having played with the remnants of Storm Ciara at their backs.

But, led by Enda Smith, Man of the Match Brian Stack, Cathal Cregg and David Murray, the team’s experienced core controlled the second half, comfortably keeping Clare at bay.

The icing in on the cake was provided in injury time when Noel Gately scored the only goal of the game.

The result moved Roscommon to mid-table ahead of the trip to Newbridge to face Jack O’Connor’s Kildare on Sunday week.

“We felt that we had been playing well. We were caught in the game against Fermanagh, we were caught in injury time against Laois, so I’m happy that the performance continued today and the plus is that we closed out the game.

“We’ve a lot of faith in our defensive set-up and our system of play. The lads stuck to the gameplan really well today. They were tough conditions. It can happen with teams that they diverge and go away from the gameplan on a windy day. In that regard, I’m happy for the lads.

“There’s still a lot of improvement there and that’s the plus of the league. When you’re playing every Sunday, you have points to work on. We’re looking forward to a massive match against Kildare now,” he said.

*Check out this week’s Roscommon Herald for report, reaction and big match analysis. 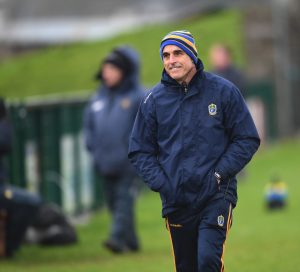