Feighan on course to take final seat in Sligo Leitrim 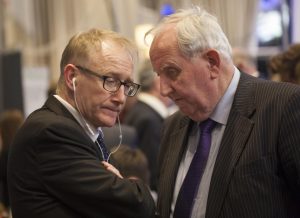 Frank Feighan is now on course to take the final seat in Sligo Leitrim following the election of former MEP Marian Harkin and the elimination of his party colleague Thomas Walsh on the 14th count.

It is expected that both Fianna Fail’s Marc MacSharry and Mr Feighan will  be elected without reaching the quota on the 15th count.

if this materialises it will be a blow to outgoing Fianna Fáil TD Eamon Scanlon who won back his seat in 2016 after a narrow victory over Gerry Reynolds of Fine Gael.

At the end of the 14th count Mr Feighan was on 7231, while Mr Scanlon had 8409 votes but the Boyle native is  expected to get a huge transfer from Councillor Walsh.

Ms harkin who was  as elected on the 14th count having reached the quota , said it was “a huge responsibility but also a great honour”.

She paid tribute to her family , friends and campaign team including many who  worked with her when she successfully contested  the 2002 general election in Sligo Leitrim.

“The work starts tomorrow,” she commented while expressing her sympathy to those candidates who would not be successful.

Ms Harkin said that politics was “very public” and “your happiness and your disappointments are there for people to see”.

The Independent candidate, the second TD elected in Sligo Leitrim  spent 15 years as a member of the European Parliament before  retiring late last year.

Speculation about her return to national politics mounted when Fine Gael tried to woo her to run for the party but last November she responded  to the speculation, saying “I would like to say that while I have full respect for those engaged in party politics, I am and always have been an Independent politician”.

Ms Harkin announcement on January 14th last that she would contest the election  as an Independent was seen as a game changer in the constituency with all political parties predicting that she would impact their vote.

She has said that she believes Independents will have that the potential to play a key role in the next Dail.