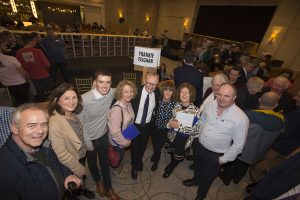 Sinn Féin’s Martin Kenny who topped the poll with over 15,000 votes  said his party had been given a mandate for change across the country and were determined to  deliver a new more inclusive Ireland.

Outgoing Fianna Fáil TD Eamon Scanlon was in the running until the end but lost out to Mr Feighan in the final count.

Ms Harkin said there had been a tsunami of Sinn Fein TDs elected but there had also been an avalanche of independents, many   from rural areas, who have been elected for the first time.

This was a clear message that people in rural Ireland were not getting their fair share “and regional policy must become national policy”, added the former MEP.

Speaking after his election ,  Fianna Fáil ‘s Marc Marc MacSharry said he had no doubt that the party had paid  a price for confidence and supply .

The election had been a bad one for the party nationally , and it was “a big surprise “ to see so many excellent colleagues gone, he said. Mr MacSharry paid a special tribute to his constituency colleague Mr Scanlon saying he was “personally gutted” to see him  lose out.

Asked about the likelihood of    Fianna Fail’s  going into government with Sinn FeinDeputy MacSharry  said the situation was “as it was before the election” . But the  parliamentary party would be sitting down at the end of the week “to have a full discussion about all matters”.

Deputy MacSharry said it was going to be a challenge with such a fragmented Dail to get agreement on a programme for government which  80 TDs would support . “I am sure nobody wants another election”, he added.

Mr Feighan said he had heard the message of the electorate “loud and clear” and the next government would have to address the many issues aimed on the doorsteps.