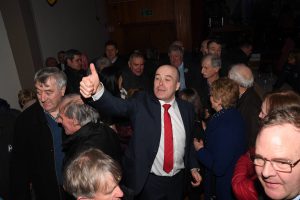 Independent Deputy Denis Naughten is not ruling out allowing his name to go forward for the position of Ceann Comhairle of the 33rd Dáil. The deadline for nominations to be submitted is Wednesday, February 19th, and a TD will be elected to the post on Thursday.

The independent TD’s name has been mentioned in connection with the position in recent days. He was also linked with the role following the 2016 election but decided against it.

“I have been contacted by a number of individual TDs from across the political spectrum to ask me to consider putting my name forward,” he said.

“For an independent to be elected Ceann Comhairle would be very difficult because you don’t have a big block of votes behind you, but I haven’t made any decision on it as of yet.

“I would have the service record and the experience, and the reality is that no one party has won the election, so it might be appropriate for me to hold that post. The possibility of me going, I honestly don’t know at this stage but I am honoured to have been asked.” The position of Ceann Comhairle is often associated with retiring TDs but Deputy Naughten said he had no plans to retire.

“If I was to put my name forward, it would be on the basis that it is a break with tradition. It would not be a retirement package.” He is also adamant that a Taoiseach will not be elected on Thursday. “I think it’s more likely that we will have our Easter Eggs before we have our new Taoiseach,” he told the Roscommon Herald. He has called for the TDs to be given time to form a new government. When asked whether he had been contacted seeking his support, he confirmed he had been approached.

“There are discussions ongoing in relation to that, but these are very preliminary talks,” he said. “I have been speaking with a number of other independent members as well as others who are members of political parties. Those lines of communication are open.” He added that “realistically” it was a matter for two of the three big parties to come together and make a “national Programme for Government. That programme should include the best proposals from all parties,” he said.