Roscommon are right back in the promotion hunt from Division Two of the Allianz Leagues following a thrilling 2-11 to 0-13 victory against Kildare at St. Conleth’s Park, Newbridge, on Sunday afternoon.

This had been billed as the Rossies’ pivotal game in the division so far, with victory possibly providing the launchpad for a tilt at promotion, while defeat would have left Anthony Cunningham’s side in a relegation battle.

Trailing by 0-7 to 0-5 at half time, Roscommon reproduced the form that saw them win the Connacht title in 2019 as goals from Cathal Cregg and Enda Smith, from the penalty spot, handed the visitors a deserved four-point triumph.

Early points from Cian McKeon, Niall Daly, Donie Smith and Cathal Cregg gave Roscommon some joy but they lost their way completely as Kildare, led by the excellent Kevin Feely at midfield, set about reeling in their opponents.

They hit seven points in succession to take a two-point lead into the break, with Roscommon enduring 29 scoreless minutes before Smith bisected the posts from a free on the stroke of half time.

It could have been worse, only for brilliant defending by Man of the Match David Murray, denying Adam Tyrrell a certain goal-scoring opportunity midway through the half.

Kildare were 0-11 to 0-9 ahead when Roscommon struck for their first goal – substitute Conor Cox, Donie Smith and David Murray all combining to set up Cathal Cregg for his side’s opening three-pointer of the afternoon.

With five minutes remaining, the second goal arrived when Cian McKeon was hauled down racing through on goal, and captain Enda Smith calmly tucked away the resultant spot kick.

Roscommon welcome neighbours Westmeath, who are also on five points after four games, to Dr. Hyde Park on Sunday next.

The county’s senior hurlers, junior camogie team and intermediate ladies’ footballers didn’t have as much joy in their games as all three teams were well-beaten in their respective encounters.

*Check out this week’s Roscommon Herald for match reports, reaction and analysis. 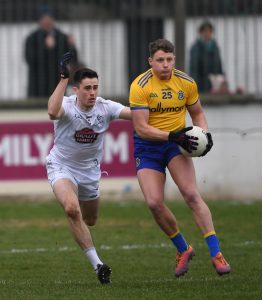 Conor Cox, making a welcome return to the Roscommon colours after injury, wins possession for his side at St. Conleth’s Park, Newbridge, on Sunday last. Picture: Gerard O’Loughlin