‘We’re up for the fight’ – Cunningham

Anthony Cunningham has issued a rallying call to Roscommon supporters, declaring that his players are “up for the fight” as the Rossies close in on possible promotion from Division Two.

Sunday’s 1-16 to 0-12 victory against Westmeath at Dr. Hyde Park leaves Roscommon in a great position ahead of two difficult assignments away to Armagh and Cavan. But a win in either game will more than likely see Roscommon make an immediate return to Division One.

“Promotion has always been the target. Our players are as good as there are in the country. But they need to believe that little bit more.

“They should be playing in Division One. They’re good enough to be there, and they should try and play the best teams. We want to be up there, and we’ll be doing everything we can to get up there, but we’ll need to get the breaks. We have two very difficult games coming up but we’re up for the fight,” he insisted.

Playing with a strong wind at their backs, Roscommon established a 1-9 to 0-3 lead at half time, thanks to Man of the Match Conor Daly’s well-worked goal in the 20th minute.

Westmeath rallied somewhat in the second period but Roscommon were always capable of keeping the scoreboard ticking over. They could even afford the luxury of a missed penalty when Enda Smith’s effort cannoned back off the crossbar, only for the Boyle player to point the rebound with the goal at his mercy.

Overall, it was a very satisfactory outing for the home side, with Conor Cox and Donie Smith contributing 0-11 between them.

“They (Westmeath) didn’t threaten a goal today, so that was another box ticked for our defence. But we’re always looking for improvement and to kick on. The games are coming thick and fast, which is good from our perspective. We want to improve every day we go out,” concluded Cunningham.

*Check out this week’s Roscommon Herald for report, pictures, reaction and analysis. 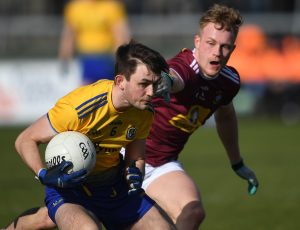